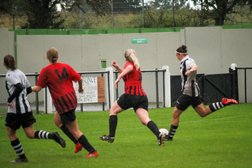 CoalvilleTown Ladies entertained Saffron Dynamo Ladies on Sunday at the Mander Cruickshank Solicitors Stadium, and needed to get back to winning ways. A defeat to AFC Leicester two weeks ago was followed by a blank Sunday last weekend, so the girls were eager to get back on track.

The weather conditions were testing to say the least, with heavy rain and a swirling wind making it difficult for both sets of players. Coalville were slow to start and found the going tough for the first 15 minutes, against a team bouyed by a 4-3 victory over Desford the weekend before. Once the home side settled though, they began to adapt to the conditions and pinned their visitors back into their own half. After 2 or 3 good chances, they finally made the breakthrough when Ash Simons crossed for top scorer Clair Dolman to head home on 23 minutes. The lead was short-lived though, when four minutes later, a hopeful ball behind the Coalville back line saw them concede a penalty. The visitors scored from the resulting spot kick and their confidence visibly grew, as they pegged Coalville back for long periods leading up to half time.

The second half was a different story though, as the Ravenettes got the all important early goal. On 56 minutes, Simons crossed from the right and Dolman finished low from inside the six yard box. Ten minutes later, confusion in the Saffron defence following another cross from the right, saw Siobhan Mullen finish from close in. The home side then made five substitutions in quick succession, but still managed to maintain enough momentum to add to their score. On 76 minutes, Mullen crossed for Warwrzycka to score from inside the six yard box, and with six minutes remaining, Emma Smith pulled the ball back and Dolman fired home her hat-trick goal.

Coalville travel to league new-comers Groby Ladies next weekend, hoping for another good performance. Kick off is 2pm at Groby College.