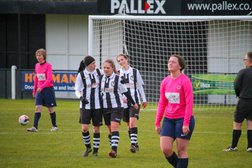 Ladies win 3 on the bounce

Another clean sheet in the final game of 2019

The Ravenettes were at full-strength with the exception of flying winger, Megan Williams, who was unavailable. Lizzy Jackson, returning from holidays, started in her place and Ella Whitby returned to the squad following an ankle injury.

The home side started brightly and, in similar fashion to last weekend, they gained a string of early but fruitless corners. On 10 minutes though, their pressure did pay off, when a corner from Rachel Coote was helped on by Leanne Shipton for new signing Amber Hylton to slot home the opening goal.

From this point onwards and for the rest of the half, the Ravenettes pressed high and did not let their opponents out of their own half. Amber Hylton added a second goal on 18 minutes before leading scorer Clair Dolman grabbed her 21st goal of the season, following Ashleigh Simon's cross, two minutes later.

Dolman then fired narrowly wide from the right hand side on 22 minutes, as Coalville continued to turn the screw. Number four was not long in coming. Ashleigh Simons drove forward down the right and smashed a low shot that ended up in the bottom right hand corner of the Asfordby net on 30 minutes.

Five minutes later, Hylton turned provider as Dolman crashed her shot home for the edge of the box. Dolman then headed wide on 38 minutes and then had a shot from the left saved by the Asfordby 'keeper.

Neither side made changes at the break and Coalville continued where they had let off in the first half, with an early goal in the second. Rachel Coote's corner from the Coalville left, was headed down by Dolman and Amber Hylton struck home her hat-trick goal.

Within minutes the home side were able to make a string of substitutions, which temporarily disrupted the flow of their play for a short time, as the girls got used to their new positions. It was not until the 51st minute when the Ravenettes were able to test the Asfordby 'keeper again. Captain Nat Jackson slid the ball through for Dolman, whose shot was finger-tipped over the bar. Then on 65 minutes, a long range Jackson strike was well saved. One minute later, Coalville were able to add a final goal when Alex Wawrzycka, jinked past a couple of defenders on the edge of the box and fired low into the bottom corner.

After the game, manager Tony Moore reflected on his teams performance. "I thought the girls applied themselves very well again today. They put the game to bed in the first half, which allowed us to switch it around a bit in the second half". The result keeps Coalville in third place, but with a couple of games in hand over leaders Desford. Moore said, "We're very pleased to be up with the front-runners at this stage of the season. It was what we were hoping for when myself and Matt first took the job in the Summer. We don't have a game now until early January, but it won't be a break for us. We've organised a number of training sessions over the Christmas period to make sure we're ready for the Saffron game on 5th January".

Player Of The Match : Natalie Jackson