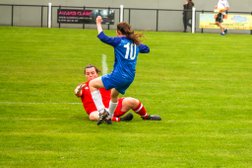 Coalville Town Ladies entertained AFC Leicester Ladies on Sunday in the Leicestershire Women's League. Last season produced a couple of very close games, and the home side were under no illusions that this too would be a tough game. Coalville were in confident mood though following their 16-0 opening day victory the previous week.

AFC dominated the first 15 minutes and rarely let Coalville out of their own half. As the pressure mounted, the away side took the lead in the 14th minute. Good build up play on the left resulted in a long range shot that left goalkeeper Lucy Cartwright helpless as the ball flew high into the net. Coalville slowly began to get back in to the game and managed to go in at the break having conceded just the one goal.

The Ravenettes though were stunned within two minutes of starting the second period, when they failed to clear the ball on the left and it was crossed in to the middle before being fired home for AFC's second goal.

Both sides tired as the game went on, but despite having much more of the play, Coalville conceded a third goal on 58 minutes, following a low shot from the edge of the area.

The Ravenettes pulled one back on 66 minutes, when Rachel Coote's corner was headed home by Clair Dolman for her 8th goal in two games. The joy was short-lived though as a cross from the AFC right was glanced home at the near post to make it 4-1.

With minutes remaining, the hard-working Lizzy Jackson deservedly notched a second goal for Coalville, as she jinked her way through the Leicester defence before placing the ball high in to the net.

Coalville don't have a game next Sunday but they entertain Saffron Dynamo Ladies on Sunday 29th September - 2pm kick off at the Mander Cruickshank Solicitors Stadium. All support welcome.