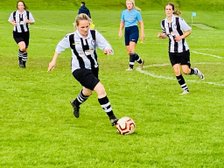 Ladies in back to back wins

Coalville Town Ladies made the short trip up the A511 and A50 to Groby to take on a ladies team that were a relatively unknown quantity to them.

Following last week's victory, the Ravenettes were forced into a couple of defensive changes, with both left-back Rachel Coote and centre-back Leanne Shipton being unavailable. Midfielder Lizzy Jackson had to slot into the left back role and Kirsty Moore in at centre-back.

A strong wind blowing down the pitch was always going to have an effect on the game, but both sides tried to keep the ball down and play some football during the opening 30 minutes.

Against the wind in the first half, Coalville played out from the back when possible and played bravely and with confidence. They forced the Groby keeper to launch long balls down the middle, which were easily dealt with. The youthful home forwards did muster a couple of chances though, but both efforts went wide of the post, after they found themselves one on one with goalkeeper Lucy Cartwright.

Megan Williams on the Coalville right was giving the Groby left-back a hard time. On 31 minutes, Courtney Folkard played Williams through, but her run forward was halted unfairly inside the area and a penalty kick given. Emma Smith stepped up to score her second spot kick in two weeks to give Coalville the lead.

Following the goal, Williams had a couple of crosses cut out at the near post and Clair Dolman curled a shot just over the angle.

With the wind in their favour, the Ravenettes felt that they would have the upper hand in the second half. Groby though, would prove otherwise, with several spells of pressure.

On 75 minutes, their pressure paid off, when a fortunate deflection saw Paterson-Sylt race clear of the Coalville defence and place the ball in to the far corner.

Coalville then pressed forward and a number of corners followed in the final 15 minutes, before substitute Ella Whitby latched onto a rebound off the home keeper and smashed the ball in to the far corner on 89 minutes for the winning goal.