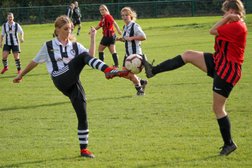 Debuts for 4 players in cup loss

Coalville Town Ladies travelled up the M1 to Whetstone on Sunday for their Leicestershire Womens County Cup 1st Round game against Saffron Dynamo.

With promotion this season a priority, the Ravenettes made nine changes to the side that won 2-1 at Groby two weeks before. There were four girls making their debuts, and four girls aged 16 in the starting line up, three of which had come through the Ravenettes junior and youth set up.

Both sides were evenly matched for the first 15 minutes, until the home side took the lead on 20 minutes, with a well-struck 30 yard effort, that flew over Hopkins and into the top corner. Saffron were visibly bouyed by this and began to exert pressure on the Coalville back line. They eventually added to their score when a through ball left keeper Hopkins exposed on 25 minutes, and the Saffron forward slotted home. Their third goal was similar, as another defence-splitting ball on 33 minutes, left the Ravenettes keeper one on one with the Saffron forward, who calmly placed the ball home.

Coalville hit back and on 42 minutes, Isla Pink played a lovely ball down the left to Charlie Hulme's feet, who skipped past her defender and hit a great shot across the keeper and into the top, far corner of the goal. The visitors then almost reduced the lead further when Ella Whitby struck a great shot from 25 yards out that whistled just over the bar.

The Ravenettes made a couple of changes at half-time and tried to take the game to the home side. Saffron though began to turn the screw and added two further goals on 52 and 54 minutes, which sealed the tie for them. Skipper Hopkins made a string of saves before a second change for Coalville seemed to lift the tempo of the game, but only temporarily. Emma Smith's persistence saw her shot hit the post for Coalville, but Saffron were not finished. They added two further goals on 67 and 80 minutes to somewhat flatter the scoreline.

Player Of The Match : Isla Pink

Coalville manager Tony Moore said "It was a good workout for our girls and a great opportunity for us to take a look at some of the players that we now have available to us. We have around 27 girls with us and we regularly get 22 of them training on a Tuesday evening, which is a fantastic turnout. Also, many of the girls that weren't playing on Sunday, made the trip over to watch the game and support the others, which I thought was nice. Trying to create a togetherness within the squad is difficult, as everyone wants to be playing, but it is important if we are to win games and championships".