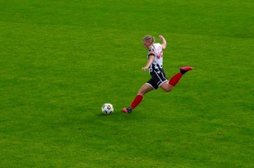 A great game which the scoreline didn't reflect

Coalville Town Ladies returned to competitive football for the first time since March due to the current pandemic in the Womens FA Cup. With the passing of former ladies’ manager Tony Moore the team wanted to provide a performance worthy of his legacy.

The draw saw Coalville hosting the tie against Oadby and Wigston Ladies, who were top of the East Midlands Woman’s Regional Football League Division 1 South before the season was declared void, and were previous county cup winners.
The tie would provide Coalville with a good test of their pre-season preparations against a team who they will meet in the league this year after Coalville Town secured promotion.

Coalville started the 1st half nervously and were under the cosh from the kick off. Oadby’s first attack was saved brilliantly off the line by debutant Elle Kingsbury-Smith, however moments later Coalville conceded through a corner set piece and minutes later found themselves 2-0 down after a shot by Oadby was only parried by the Coalville keeper into the path of the Oadby striker.

The Ravenettes started to settle in the game and started to play some good football, with Neve McDermott slotting a delightful through ball to her fellow debutant Evie Brooks who was unlucky not to score. Coalville carried on to threaten in attack with Neve playing this time Siobhan Mullen on goal but her effort was well saved by Oadby’s goalkeeper.

Coalville were starting to settle into the game but from conceded from another Oadby corner at their near post to find themselves 0-3 down after 15minutes.
The game started to open up and become quite even but Oadby punished Coalville with some good counter attacking football just before the break to go in at half time 5-0 up.

Coalville started the second half determined to carry on the positive performance which wasn’t reflected in the 1st half scoreline, although unlucky to conceded to make it 6-0 early after the restart, Coalville kept threating with Evie Brooks creating numerous chances. Moments later Coalville finally found the net from a corner. The ball dropped to another debutant, Sophie Chapman, who scored from 8-yards through a crowd of players.

Coalville Town carried on to match Oadby and Wigston’s performance and dominated the possession during the 2nd half, and could have scored again from a great run from Evie Brooks who found Megan Williams in the box but after taking on two players her shot was saved by Oadby’s goalkeeper.
Coalville carried on applying pressure to Oadby who were more clinical on the day and increased the score line to 7-1, however Coalville scored the goal of the day after a run by Brooks who pulled the ball back to Alexsandra Wawrzycka on the edge of the box and after taking a touch curled the ball into the top corner to finish the score line. 7-2

The scoreline was harsh on Coalville but it’s all about taking the chances. With 4 players making their debut including three 16 year olds the experience will be invaluable to them going forward.