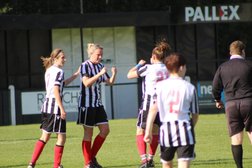 Newly promoted Ladies get off the mark

Coalville Town Ladies started their first game in the East Midlands Womens Regional Football League at home to Thrapston Town Ladies determined to show they belonged there after promotion during the summer.

From the start Thrapston had a good chance but Sophie Chapman had to be alert to close down the opportunity. Coalville then started to play and a good passing move from back to front involving Rachel Coote, Lizzy Jackson and Neve McDermott created the first of many chances for Siobhan Mullen who shot straight at the keeper.

There was some great football being played by both sides and a great long range effort by Thrapston brought out an amazing save from Kate Page tipping the ball over the bar. The resulting corner was headed just wide by Thrapston.

The game was opening up and was end to end. A short goal kick from Coalville was played up the right hand side giving another good opportunity for Mullen but she could only put her shot wide of the post.

Coalville created a great 2 v 1 chance but the shot was hit just over the crossbar. Moments later Coalville had a shot deflected onto the post with Meg Williams following up but putting it wide when it looked like she would open the scoring.

We didn’t have long to wait much longer for the first goal. A great through ball put Clair dolman 1 on 1 with the keeper and she doesn’t miss those chances making 1-0 to Coalville.

The goal spurred Thrapston on to try and find an equaliser and a quick attack was thwarted by some great defending from Amber Hylton and Rachel Coote. Moments later though a mix up at the back allowed Thrapston to score.

The second half started with Thrapston putting Coalville under lots of pressure with the post coming to Coalville’s rescue. A corner from Thrapston saw the ball scrambled clear of the goal line.

Coalville were having to play counter attacking football to relieve the pressure and Neve Mcdermott had a good chance but shot straight at the keeper.

Coalville made a couple of substitutions to try and change things with Lizzy Jackson and Meg Williams making way for Jess Vale and Alex Wawrzycka.

The game was very end to end with chances for both sides when Dolman was fouled by a Thrapston player who received the only caution of the game. Dolman took the resulting free kick but hit it straight at the keeper for a comfortable save.

With both sides pushing for the win the Thrapston keeper made a brave save at the feet of Dolman after a cross from Mullen. A last ditch tackle by Chapman stopped Thrapston taking all 3 points as a very entertaining game finished 1-1