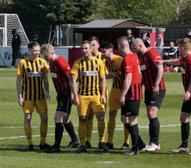 Midweek and the Bank Holiday Weekend round up

By Cobham News Editor
4 May
Share via
FacebookTwitter
https://www.pitchero.com/clubs

It’s one loss, two wins and a second quarter final place after 6 points from 9 over the last week and bank holiday

After a disappointing 3-1 loss to a strong Abbey Rangers side last Tuesday night, Cobham made it 6 points from 6 after two wins over the weekend after to social media channels fell silent in solidarity with footballs stance over discrimination and online abuse.

First up, the Hammers travelled to Colliers Wood where they took on Westside in the Fripp-Smith Trophy with 3 points a must. Goals from James King, Dominic Lugard and Jonathan Hood secured a 3-0 victory.

It was then on to Redhill on Monday morning where strangely even a win may have left three sides on level points with only two going through. As it turned out, results elsewhere meant that a point would have been enough but without knowing that till full time, having gone 1-0 up, it took a second half come back to secure a 3-2 win over the lobsters. Goals from Jonathan Hood, Ben Senior and Ryan Debattista did the damage.

Elsewhere our u23’s had a fantastic result against Farleigh Rovers to book their place in their second semi-final. A 9-0 win was secured with goals from Sean McDonnell (3) Alex Body (2) Emmanuel Boketsu (2) and one each from Henry Lugg and Ben Smailes.