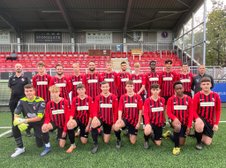 The Bank holiday big weekend for the u23 side as they keep their nerve from the spot....

Cobham u23’s competed in not one but two finals this bank holiday weekend having racked up some impressive results in the last month including a 9-0, 6-0 and 5-0 wins. More importantly, the management team led by Pete Doherty with Lee Innes and Craig McManus have been nurturing the talent throughout the season and delivered several players in to the reckoning for the senior side too with 16 year old Will Hellestoe and 18 year old Harlem Bouchez featuring heavily over the last month of the season with the Men’s side.

How do you judge the success of a development team? Whilst the primary goal is to develop our young talent in to senior footballers, what a great added bonus for that side to also have extraordinarily successful results on the pitch and that’s exactly what we’ve been having this season.

With the majority of the squad in the 16-19 age bracket, they have benefited from playing in a men’s league this season to help their development.

Sam Merison couldn’t praise the work going on in the development side enough saying "The way in which the players are looked after by Pete, Lee and Craig astounds me on a regular basis, as boys becoming young men they obviously need a special kind of environment to grow as both people and footballers. They consistently deliver high quality training sessions, individual advice and care and of course this season have exceeded expectations with results on the pitch too. They have around 20 players that they work with regularly who could all push for places in the senior set up and are being nurtured for that as they go. The dream is that all of these players go on to first team football, but it is about more than that, one of the youngsters sheepishly let us know he is off to America next season on a football scholarship so won’t be able to play for us, I think he was nervous to say it but as a club we couldn’t be happier. If we have helped in any way for that particular dream to happen then it’s as fulfilling as a player making his first team debut."

In the first final, the Surrey Elite Covid Cup took place at Farleigh Rovers FC on Saturday 29th May against Frimley Green u23’s. The match ended in a penalty shootout victory for the Hammers with Will Lacey the hero saving 4 spot kicks.

Some 36 hours later, they were back in action in the Surrey Elite League Cup this time against Virginia Water u23 at Staines Lammas in the morning kick off. This was another close encounter and ended 1-1 after 120 minutes with Adam Brennan scoring from the spot during normal time. The Hammers once again came through on penalties to please a large crowd enjoying the sun.