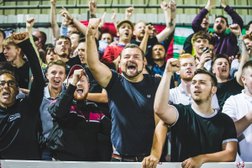 Four sides are still unbeaten after the first five games but there’s still plenty of questions to be answered - what will we find out in September?

Berkhamsted are certainly making their mark and sit level on points at the summit with Corby Town. Not many will expect winless Wantage Town to upset the early leaders but the Alfredians will be desperate to get on the board.

Unbeaten Aylesbury are proving their credentials early on and have conceded just once – meaning Cameron Stuart and his Coleshill Town side might have a job on to leave Buckinghamshire with anything.

Didcot have only scored once in their opening five outings but a trip to St Neots might give them confidence of a change – the Saints have the joint-worst defence in the division.

Izale McLeod will be looking to improve on his form against Yaxley after netting four goals in two games for Kempston.

Dunstable tasted defeat for the first time this season last time out but Saturday’s opponents Bedworth United are hurting after taking four points from their first four games.

Goal-getters Barton Rovers have netted 14 goals so far and they host Daventry who have made a habit of incurring heavy defeats of late.

Welywyn Garden City’s fine unbeaten start will be tested to the limit against Thame United who will be pushing with everything they have to bag a first win of the season.

Elsewhere, Biggleswade have put their poor start behind them and will be looking to continue their resurgence against Kidlington.

Vanarama have recently launched the Club Reward scheme to help fans back their club’s budget. Every time a fan takes out a brand new van lease with Vanarama or a brand new car lease with Mototama their club will earn £100 and you will receive £30 cashback!