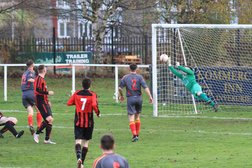 There were four changes to the line-up, and some changes in roles following last week’s abandoned match as manager Richard Davidson attempted to get results back on track.

Both teams fielded youthful sides, and despite the heavy surface, the game started at a quick pace. The visitors were troubling the home defence on both wings, and after only three minutes Keith Robertshaw was forced into a smart save to prevent Colony going behind.

Halls did not have all the attacking options, and a brilliant run and cutback by David Clark saw Stuart McKay clip the outside of the post when he might have scored. Greg Cowie also powered in a header which brought out a smart save by the visiting keeper, (see photograph) and Connor Kiloh screwed a shot wide.

A goal was inevitable, and it was Hall Russell who opened the scoring. The visiting striker was played in, and although Robertshaw saved the initial effort, the rebound fell to an attacker to put the visitors up in the 12th minute.

There was very little between the sides, and Colony began to push the visitors back. Kevin Bonarius tried his luck, but the Utd. Keeper dealt with his effort. However, in the 26th minute, Connor Kiloh scored a well-worked equaliser.

A ball down the middle was headed into the path of Kiloh by Cowie, and the youngster drew the keeper before blasting a shot into the top corner of the goal.

Both sides pushed for their second goal, but there was no further scoring by the interval.

Hall Russell came out looking to gain the advantage at the start of the second period, and went ahead in controversial circumstances. Following a challenge, it seemed quite clear to most that the result should have been a goal-kick to Colony, but the referee awarded the visitors a corner. Colony failed to clear properly, and on 51 mins., Utd. went ahead once more with a shot from the edge of the penalty area which gave Robertshaw no chance.

The home side did not submit and pushed for another equaliser. This came six minutes later. Once again, it was David Clark who caused problems. He attacked the Utd. Defence at pace and when he tried to round his marker in the box, he was tripped and Colony were awarded a penalty kick.

Skipper Stuart McKay was his usual efficient self, and duly converted to level the scores once more on 57 mins.

Hall Russell were flooding forward, and Robertshaw showed his worth with another save from close range. The visitors were pressing hard, but Colony were still looking dangerous on the break as both teams went in search of a winner.

Conor Strachan and Greg Dorrat replaced Kevin Bonarius and Greg Cowie as the game raged on. Barry Peden and Adam Morrison were forced into last-ditch tackles as Utd. Tried to take advantage of their pacey attackers.

Hall Russell saw efforts go wide and hit the woodwork as they exerted pressure late on, but the home defence somehow managed to shut them out and claim a valuable point.

There is no doubt that Hall Russell should have won the game if it was judged on chances created, but Colony deserved some reward for effort alone. There were three changes to the Colony back four, and David Clark was asked to play an unfamiliar role wide on the left. The home side rode their luck, but luck is something which has been missing of late. Let’s hope there is more of it in weeks to come.