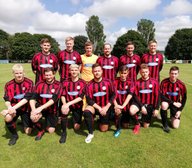 There was only one change in the Colony line-up, with Stuart McKay replacing Greg Cowie, who had a place on the bench.

The home side were looking to build on the victory over East End, but got off to a horrible start when a ball out wide saw Steve Morrison caught off balance, and his opponent had a clear run in on goal. His initial shot was saved, but the rebound fell kindly and he followed up to put Lea ahead after only 6 minutes.

Despite the setback, Colony were giving as good as they got, and David Clark had a shot well saved on 18 minutes. The same player was put through by Adam Morrison in 24 minutes, but screwed his shot the wrong side of the post.

Despite the heavy pitch, the game was being played at a fair pace, and both sides were creating chances. One of these fell to Andrew Mitchell, but his snatched attempt did not bother the keeper.

Colony looked to be comfortable and were looking to restrict Montrose, but once again a blunder gifted the visitors a second goal 5 minutes before half-time. A long ball across the pitch looked like it would be headed clear by Steve Morrison, but a shout from Keith Robertshaw saw the full back leave it. The unfortunate keeper did not reach the ball, and the challenging Roselea forwarded nipped in and was left to roll the ball into an empty net.

Adam Morrison still had time to test the Lea keeper, but half-time saw the visitors two up.

Colony started the second period with determination, but the visitors were quick to close down and snuff out any danger. Colony were desperate to get the next goal, but it was Lea who struck again. Ten minutes after the re-start they went further ahead, when their central midfielder was able to ride a couple of challenges and rifle a shot past Robertshaw into the corner of the net.

On the hour mark, Greg Dorrat was cautioned for a trip, and from the resulting free-kick, Robertshaw saved well. Moments later there was a double substitution when Pete Douglas and Graeme Cochrane replaced Steve Morrison and Andy Mitchell.

Try as they might, Colony could not get back into the game, and on 72 mins. Lea might have gone further ahead, but skewed a shot past when it looked easier to score. Greg Cowie immediately replaced Bryce Dawson, as the home side tried to strengthen their attack.

The game fizzled out with little more incident, as Lea were able to deal with the extra man up front.

This was a disappointing result for Colony, but no amount of planning can prevent individual errors. Despite the half-time score, the home side had not played badly, but were unable to convert the chances that came their way. Goal umber three almost killed the game, but to their credit, the Colony players did not give up, and tried to the end. The next two matches are hugely important, and we look forward to them.