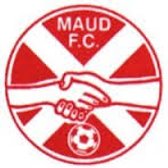 New loan signing Jamie Brailsford came straight into the team which showed several changes from the line-up which started against Montrose Roselea.

After a cagey start when both teams looked like they were trying to weigh up each other, the home side started to exert pressure, and the pace of David Clark looked like it was going to present problems to the Maud defence. During the opening 15 minutes, Clark might have scored twice, but it looked to be a matter of time before the opening goal arrived.

This became more inevitable in the 19th minute when Clark powered past the Maud defence, only to be halted by a crude trip as he approached the Maud penalty area. As a result, the visitors were reduced to 10 men when the referee flashed the red card.

It was one-way traffic, although Colony took time to adjust their game against the 10 men, and chances came and went for David Clark, Stuart McKay and Pete Douglas.

Clark again showed his worth when he drove to the goal line and cut the ball back for Graeme Cochrane to prod in from close range to open the scoring on 36 minutes.

The home team now had the bulk of the possession, and Clark once again and Brailsford might both have scored as Colony looked for a second.

Just before half-time another goal arrived. A delightful pass through the middle saw Graeme Cochrane one on one with the Maud keeper, and he produced a clever finish. Cochrane forced the keeper to go to ground then took the ball round him before lashing it into an empty net to double Colony’s lead.

The second half started with Colony once more having the bulk of possession, and the home side looked in confident mood as they moved the ball about well. The visitors seemed content to soak up pressure and hit on the break, but none of their efforts troubled Keith Robertshaw, who was having a welcome quiet afternoon.

Kevin Bonarius saw a shot go over the bar, and Graeme Cochrane blew a chance of a hat-trick when he blazed the ball past the post from inside the area. David Clark had done his bit, and was replaced by Greg Cowie just after the hour mark.

The home side had dropped their intensity from that of the first-half, but were well in control with the defence rarely being tested and Connor Kiloh was given a run out when he replaced Andrew Mitchell with around twenty minutes to go.

Neither side created anything of note, and Steve Morrison replaced Kevin Bonarius in the closing minutes to see the game out. With the clock running down, Greg Cowie missed a good chance, and the keeper saved well when Pete Douglas shot from close range. Despite all the missed chances, Colony were comfortable winners as the final whistle went.

Full Time: - Colony Park 2 – 0 Maud
This was a welcome win for Colony, and the manner of the victory was very satisfying. Maud played the bulk of the game one man short, but prior to the dismissal, the home side had passed and retained the ball well. Putting points on the board is essential, but the Colony coaches would have been encouraged by the confident way this was done, although the team needs to convert more chances. Another stiff test awaits against Banchory St Ternan this coming Saturday.