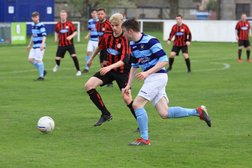 When we last played Banks O’ Dee I said “If you want to beat Banks O’ Dee, you need to field your strongest side, and hope that every player performs to his maximum.” That day, 8 players were unavailable. On this occasion, the number unavailable was 9, and the manager named himself as a substitute.

The team formation was changed with the wide midfielders being asked to drop back to defend when required, and Steve Morrison and Kev Bonarius playing in the centre of midfield.

As expected, Dee attacked right from the start, but the home side’s tactics seemed to be working, as the visitors did not have a serious attempt until the 10th minute. The home side took every opportunity to break and Andy Mitchell saw an attempt go just wide two minutes later.

Dee took the lead in the 17th minute when a clever lob from inside the box beat Robertshaw.

Colony tried to hit back, and David Clark came close, but the home side did not have to wait long for a goal after Andy Mitchell was pushed in the box, and David Clark made no mistake with the resultant penalty on 22 minutes.

On 26mins, Dee went ahead again, when they were awarded and scored from another penalty. Four minutes later, Dee had scored another twice, and made it 1-5 on 35 mins.
with devastating attacking and lethal finishing.

Colony changed their shape with Steve Morrison dropping to left back, and seemed more settled, with Martin Crisp and David Clark both seeing efforts saved in the run up to half-time.

The second half saw Dee resume their attacking game, but the first chance went to Colony as Adam Morrison was out of luck. However, Dee scored their sixth when the offside trap was broken, and once again Dee finished clinically.

Colony, to their credit, still plugged away, and a lovely ball by Kev Bonarius found David Clark who blasted home from inside the box.

A minute later, Dee scored again as they flooded forward. Andy Mitchell was out of luck with another attempt, and on 63mins, Colony made a change with Greg Cowie replacing Steve Morrison, and Graeme Cochrane moving into the back line.

Unfortunately, Colony seemed to take some time to settle after this and Dee scored a further four goals in a nine-minute spell.

Greg Cowie had performed well since his introduction, and he brough out a superb save from the Dee keeper in 79 mins. Colony scored their third from the resultant corner, when Adam Morrison rose above everyone and looped a header into the net at the far post.

Dee were not finished and scored twice again before the final whistle. Cowie had seen an effort go narrowly past between these goals, and can be happy with his contribution after coming on.

This was a day to forget for Colony. Banks O’ Dee are unquestionably the best team in the league, and they gave a lesson in clinical finishing. They were helped by poor marking and failure by Colony to clear their lines, and a high proportion of the goals conceded were preventable. The home side looked good in attack, but need to improve the goals from chances made ratio. Let’s put things right in the games to come.