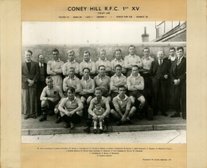 The Coney Hill Rugby Football Club was officially formed in 1947 by old soldiers returning from Dunkirk to their homes in Coney Hill. Home games were played on local farmer "Stinger' Longs land (Stinger got his nickname due to the fact if he caught you pinching his apples you were thrown in the stingers!!), now called Birch Avenue whilst the old chapel in Arreton Avenue was used as changing facilities. A tin bath was used to wash away the mud in the early years which when used by thirty or so men often left you dirtier than when you came off the pitch!! So when local tradesman Wally Russell built what was one of the first tiled baths at a rugby club a match fee of half a crown was imposed to play and help pay for its construction.

Mrs Nancy Ralph was one of the first club stalwarts and used to collect money by rattling a box round the touchline at every home game. She was notorious as Hill's third winger as she would often extend her umbrella from the touchline and accidentally trip up the opposing winger!

The first Chairman of the club was Mr Ray Pugh who was a Sergeant Major in the British Army and organised the first game played by Coney Hill just before they were officially formed, The game was played at the Old Drill Hall in Chequers Road against the Territorial Army. The shirts were numbered backwards in those days starting at number 1 for the fullback, the team photo is enclosed

Team Coach was Harry Hemmings and the first Tea Boy was Tiny Clune.

The first club treasurer was Mr Harry Newman who was one of the first to donate money into the club to help get it started, he generously gave £ 200.00.

Other notable local supporters of the club were:- Mr Dando was known as the singing barber because you paid him 4 pence for a haircut and he played you a tune on his violin and danced, The Broady family who owned the Fish & Chip shop, The Wilmot's who ran the Sweet shop and Percy Langley who had the butchers on Arreton Avenue.

If you have any information, memorabilia you could loan the club to put on display in the club house or stories relating to the club & its early years please contact Simon Baldwin at simon.baldwin@coneyhillrfc.com or Tel 07766 821102.

Once these stories are gone sadly they're gone forever if they're not documented.