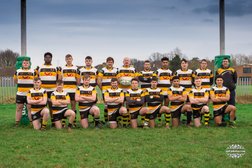 Modest as he is Ryan Barnett said he had 'No Choice' but to award himself Man Of The Match today - Because in his own words 'I was Awesome Again!!'

Coney Hill 2nd’s put in a dominant performance to come away from Cirencester with a convincing win.

After useless Captain Julian the loop Mini Me Martin Owen Buffin lost the toss, Hill kicked off down the slope and soon the confrontational back row of Zak Underwood, Charlie Hitchman and Sashon Lewis were making inroads into the hosts defence. Hill could have scored within the opening few minutes however indecision and a lack of accuracy gave Ciren the opportunity to clear their lines. It was however hard work for the hosts and eventually Hill opened the scoring when Hitchman broke through a midfield ruck to run 40 metres and score. Ryan Barnett converted.

It didn’t take long for Hill to double their lead. A smart offload from Craig Overthrow in midfield gave Liam Thomas some space to run and having moved the ball on to Full Back Sam Wood he was back in support again to take the scoring pass. With a 400mph wind to deal with, Barnett nonchalantly knocked over the conversion.

Despite a strong start and the opportunity to turn the screw, Hill found themselves getting a little complacent and they struggled to put many phases together. The game became disjointed and the only incident of any note was the referee dishing out a double sin bin for what can be described as nothing but a cuddle.

Whilst Hill were in control of the game it was clear that Cirencester’s “stocky” pack were going to enjoy getting up a head of steam down the slope and they were soon putting the hill defence to the test, although they found very little change from the centre partnership of Overthrow and Thomas who were in a no nonsense mood!

Having spent 10 minutes under the cosh Hill seemed to have weathered the storm however a momentary loss of concentration allowed the Ciren number 8 through and he duly obliged with a try that went unconverted.

Ciren smelt blood and continued to take the game to Hill but it was the visitors who dealt the killer blow with three tries in the space of 10 minutes. From a midfield scrum inside their own half Hill broke down the blind where Barnett drew 5 defenders before serving up a delightful behind the back pass to Wood who run in the score. After signing a few autographs, Barnett knocked over the extras!

From the restart Hill earned a penalty which was kicked to the corner and after a number of drives captain Buffin used his low centre of gravity to burrow over. Conversion kicked, 28-5. Hill weren’t done and lovely running lines from Overthrow and Thomas open a hole in the home teams defence for Barnett to waltz through. He could have beaten the remaining 4 defenders by himself but unselfishly gave the pass to Thomas for him to score his second. Conversion... yep... 35-5.

That brought the score to 35-5 and the funniest comment of the day made by Gavin Mann, who innocently asked the fantastic fox “have you missed yet?” haha... good one Gav!

With the game firmly under control and the thought of having to run 80 metres up a fairly steep incline, Hill were happy to see out the remaining 15 minutes in their own 22. Ciren continued to work hard and to their credit scored their 2nd try when from a tap penalty their number 8 spotted Hill Hooker Sam Hall sparking up a Lambert and Butler and brushed past him to score his 2nd. Hall immediately announcing his retirement afterwards.

In all seriousness a good performance on the whole with plenty of aspects of our game that we can improve on but the Nucleus of a good side that will take some beating in Gloucestershire Reserve League North 1.

Special mention to Liam Thomas who excelled at outside centre, the entire back row of Underwood, Lewis and Hinchman, as well as Julian the Loop who played 60 minutes, despite having to also play for the mighty Vets the following day!