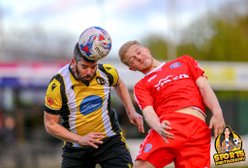 Dominant Bears March On in the Vase

The Bears went into this game on the back of some good wins but had [problems during the warm up when both Chris Baker and Jordan Johnson were injured.

Up-stepped Stanley Tatters from the Reserves for his first start and Will Buckley and Max McCarthy on the bench.

The Bears went for their opponents from the off and were in front after just two minutes, debutant Tatters crossing low and Lee Williamson tapped home from close range. Before Gresley had time to get in to the game Aaron Bott made it 2-0. Arron Johns feeding Bott who had a simple tap in.

Elliott Fenton then had a couple of chances, both going over the bar, but the Bears dominance was rewarded on 19 minutes when a mix-up in the Gresley defence, with the keeper and a defender each leaving the ball to each other and Jonathan Beaumont said ‘thankyou very much’ as he tapped home to make it 3-0.

Gresley were looking all at sea and put very little pressure on the Bears goal. On the half-hour mark it was just about game over when Aaron Bott brought the ball down just inside the box and fired into the corner, 4-0 to the Bears.

Gresley thought they had one back as the half ended, Kolodynski fired one at goal, only for Fenton to block brilliantly on the line.
Half Time: Congleton 4-0 Gresley Rovers

The second half started much more brightly for the visitors and they dominated the opening fifteen minutes and would have got a goal back but from another superb goal line clearance this time from Josh Ryder, after Briscoe looked to fire home. Smikle went close from a corner, but his header went just over the bar.

Bears had to make a sub on 49 minutes, Dan Cope replacing the injured Beaumont and on the hour, Will Buckley replaced Fenton.

The Bears came back into the game in the final twenty minutes and created a number of openings, Ryder with a header wide, Johns forcing the keeper to save low down and Buckley seeing a long range effort held by the keeper.

On 77 minutes Bott was really unlucky not to complete the hat-trick when he hit a volley from distance that rattled the crossbar. Final sub then saw McCarthy on for two goal hero Bott.

The scoring was completed in the 84th minute when Buckley found the bottom corner of the net.

This was an excellent performance from the Bears as they go into the bag for the Second Round draw – the game was scheduled for 28th November, but is now likely to be put back until December.