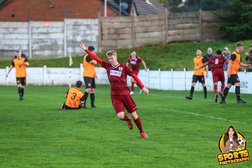 Bears Through on Penalties

Cars there were aplenty, crammed both inside and outside the Stadium, but humans seemed scarce, no queues, no bustle, little movement or sound.

The pitch, on a day when several other games fell to waterlogging, looked in immaculate condition, firm, even and well-grassed.

R2 of the FA Vase was to be decided promptly, 90 minutes and penalties, no extra-time and no replays. In the event, this was to be a blessing, as a game of constant mediocrity unfolded before 191 frozen spectators.
Four goals, three dismissals, multiple yellow cards and several incensed melees punctuated the 90 minutes, but good football and genuine excitement were palpably absent.

The referee struggled throughout, and spectators were frequently puzzled as to what was being adjudicated and why.
The Bears began upbank, but the sun was fading fast so the significance was minimal.

After less than 5 minutes a collision, an argument, 3 rapid yellow cards, 2 to one player, and New Mills were a man short. A moment of flickering quality shortly afterwards when Jordan Johnson's short, clipped centre was brutally and beautifully headed into the net by Arron Johns put the Bears ahead. 1-0.
The youthful looking New Mills team were sufficiently busy, and the Bears sufficiently lethargic and aimless to keep play even.
A penalty awarded to New Mills when Dave Parton collected a high ball under challenge surprised almost everyone. 1-1.

New Mills began to display worrying fragility, collapsing heavily under even mild challenge, and their teammates instant, indignant swarming of the referee became a recurring feature of play. Fortunately, recoveries were almost immediate, but yellow cards sprouted like premature daffodils.

1-1 it was at the interval, after a poor half. There was little talk of the Football - instead moans, groans, laments and despairing sighs at the missing pies, pints, burgers and chips.

New Mills emerged early into the increasingly chill gloom. The Bears ,and the officials, seemed less enthusiastic, but eventually reappeared.
Poor control, wayward passing and general aimlessness remained the main features of the play. A rare, but determined, burst down their right ended with the visitors scoring as Parton rushed desperately off his line. 1-2.

A carbon copy at the other end minutes later and Jordan Johnson levelled the scores. 2-2.
The Bears developed some late momentum as they tried to avoid trial by penalties, but a sudden eruption of personal hostilities near the home dugout saw a player from each side banished from the field. Neither were at all sure why they had been expelled, and no onlookers could enlighten them.

And so, mercifully, to penalties.
Even they were unremarkable until, at 4-4, Dave Parton saved. Dan Cope swiftly stepped up to score, 5-4, and let us all go home.

As several players from both teams remarked later, this game was a casualty of Covid, a consequence of the current disruption and uncertainty of daily life.

Manager Ryan Austin was philosophical about it all

"We are delighted that football is back and also (its) nice to have our fans in with us".
In common with those fans he was puzzled by the officiating and commented
"Some of the decisions by the officials were baffling to say the least, there wasn't a bad tackle in the game and somehow 3 players were sent off and numerous yellow cards. Lee Williamson 's red card is a disgrace I'm 2 yards from the incident and he's just held the lad off the ball and what the ref has seen nobody in the ground has any idea??"
He disagreed somewhat over the quality of the game, showing admirable loyalty to his players, when he said
"I thought the game was an entertaining one for the neutral and had a bit of everything ".
What everybody agreed, however, was that
"The most important thing of the day was to qualify for the next round of the competition and we achieved that...obviously we are happy to be in the draw for the next round".

The Bears have been drawn at home, to Coventry United of the Midlands Football League.