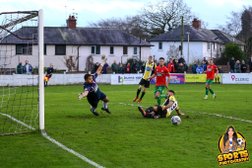 Bears through to Vase 4th Round

Coventry started the game positively and had the Bears on the back foot from the kick-off, creating several early chances. Graves came closest for the Bears, forcing a good low save from Francis. Then a penalty for Coventry after a push in the box, Parton though was superb, saving low to his left. A Red card for O’Grady after just 27 minutes looked to have pegged the visitors chances back, but minutes later O’Sullivan put them ahead, advancing on goal and slotting under the diving Parton, 1-0.

The Bears created a few half chances, but it was Coventry who had the better of the half. Bott and Buckley came closest for the Bears.

It was almost 2-0 straight from the restart, O’Sullivan again in the danger zone and forcing yet another great save from Parton.

The Bears began to claw their way back and the pressure began to tell as the attacks mounted. Graves putting in a dangerous cross which just evaded everyone and the rain was getting heavier and heavier.

Finally the pressure paid off in the 72nd minute. Johnson played in the cross to Johns, who took the ball in front of the defender and fired home from close range. 1-1.

Buckley now began to control the midfield for the Bears and moved the ball around well, creating openings. Johns almost made it 2-1 minutes later with a header that went just wide then Buckley forced Francis into a back-peddling save.

With added time coming to a close and the scores level, Francis made a crucial save at Bott’s feet as the striker looked destined to score.

The game went straight to penalties and it did not start well for the Bears. Coventry converted their first two with the Bears missing their first. Jepson scored to keep the Bears in it then Coventry shot wide and Bott did the same. Up stepped Duffy for the home side, trailing 1-3 and knowing a miss would put the Bears out – he fired home. This time the crossbar stopped Coventry and Cope hammered home to make it 3-3. Unbelievably , Coventry ten hit the bar again and up stepped the coolest man on the field Will Buckley who fired into the corner – The Bears had won 4-3, amazing scenes as the ball hit the back of the net.

The Bears will face Malvern Town at home in the Fourth Round on 9th January.