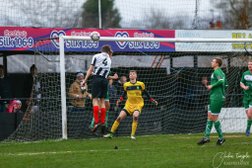 First drawn game of the season

With new signing Paul Speed on the bench and Mini Adegbenro and Tom Schofield suspended the Bears were looking to keep the pressure on at the top of the table.

Burscough came into the game on a good run of form with 6 wins in their last 9 games, the last being a 4-1 win at improving West Didsbury and Chorlton. The wind and rain proved to make play tricky.

The Bears started the game brightly and a great run by Billy Hasler-Cregg on the left was thwarted by a strong tackle just inside the box. A free-kick inside the Burscough half was hit well by Dan Cope but the keeper was there to tip it round the post and the corner was cleared.
Burscough then created a couple of half chances but the defence was working like the usual well-oiled machine that it has been this season. Hasler-Cregg was fed by Cope who ran on but shot over the bar.

The visitors almost opened the scoring when Chad Whyte picked up the ball in the box, he rounded Craig Ellison but Tom Morris was there to clear off the line. Cummings was then brought down on the edge of the Bears box but Ellison had an easy save from the free-kick.

The Bears then began a period of sustained pressure. Saul Henderson shot just wide and Bevan Burey headed into the keeper’s arms after a neat cross from Rick Peters. Henderson was unlucky again when he was dispossessed by visiting keeper Povey inside the box and Dean Warburton shot inches wide as the half drew to a close.

Burscough had the first chance of the second half as Jordan Lorde shot wide. On 51 minutes the Bears thought they had the opening goal. A free kick was played into the Burscough box and Morris was on hand to put the ball into the net at the far post, unfortunately, the assistant referee raised his flag for off-side, much to the consternation of the Bears players and supporters.

Burscough were getting stronger as the game went on and had a couple of chances which went wide. Antony Griffith was on hand to block a shot in the Bears box that looked goal bound, then Tom Stephens was there to do the same minutes later.

On the hour Burey played a delightful ball to Cope who flicked it goal wards but Povey held well. Henderson was then on hand to knock in a good cross but no one could get on the end of it.

Pressure from the visitors saw shots go wide and Ellison make a couple of comfortable saves, but they were having the better of the half until Hasler-Cregg made a great run and it took a spectacular fingertip save by Povey to deny him. Three corners for the Bears followed with the ball eventually being hoofed clear. New signing Paul Speed made his debut on 74 minutes, replacing Warburton and within two minutes he was in the referee’s notebook for a late tackle!

The Bears made their second change with seven minutes to go; Steve Foster replacing the hard-working Hasler-Cregg. He had a chance almost immediately but the keeper caught the shot. Burscough went down the other end and Ellison was there with the catch.
The final action of the game almost brought a winner when a shot in was blocked on the Burscough line.

The final whistle brought to an end a very even game with both sides creating chances but neither being able to convert.