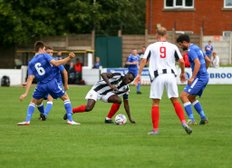 The Bears were looking to open their home league campaign with a win but the visitors had other ideas, gaining a well deserved victory. The Bears were missing Tom Morris, Jordan Lorde and Paul Connor and fielded a starting 11 who all played last season.

The Bears started well and won a free-kick just outside the box, Bev Burey crossed it but the ball was cleared. Longridge were looking very lively and knocking the ball around well. A good move saw Birch make a strong run down the right before firing in a a screamer which Craig Ellison finger tipped out for a corner. Dom Willaims did well with a number of long throw-ins which caused problems in the Longridge defence, but the Bears lack of height up front didn’t help them make use of this.

The opening goal came on 10 minutes. Sinclair-Smith picked up the ball on the left then hit a pearler which gave Ellison no chance. Two minutes later it was all square. Mini Adegbenro was fed the ball by Dan Cope out wide and his low, hard cross was finished with aplomb by John Main. The Bears were back, or not. Two Longridge goals in the next 4 minutes put the Bears under real pressure. First Sinclair-Smith finished with a similar strike to his first and then Turner down the right hit a shot which again gave Ellison no chance, 3-1 Longridge and just 16 minutes on the clock.

The Bears had a good penalty shout waived away when Cope was brought down off the ball as Burey crossed. Main worked himself a good opening on 25 minutes, but his final shot lacked power.

The Bears had chances, McLellan just failing to get his head to a Speed free kick then Adegbenro crossed low to Main whose close range effort was superbly saved by Dovey in the visitors goal, Cope could only fire the rebound into the side netting.

Longridge then played out the remained of the half, content with their lead.

The Bears needed to start the second half with a positive attitude but it was Longridge who continued to dominate and after Antony Griffith lost the ball in midfield a strong run saw Ince fire just over. Ellison was looking strong and held a couple of fierce crosses well.

Too many Bears passes were going astray and few chances being created. Adegbenro battled well to win the ball out wide, moved into the area but his shot lacked pace and was saved easily.

65 Minutes, Bears brought on Saul Henderson for Williams to bolster the home attack and then Johnny Higham for Main. Sinclair-Smith thought he had his hat-trick on 75 minutes but a superb Ellison save kept him out. Seconds later the post came to the Ryde rescue. Paul Speed then fired one in from the edge of the box, Cope just failed to deflect it into the net. A bought of ping-pong in the Longridge area saw several players snatching at chances , Ryder saw his shot blocked and Adegbenro’s rebound effort hit Cope and was cleared.

Burey was thwarted when Dovey made a superb low save by the post after Higham had fed him a perfect pass on the right, then McLellan headed the resultant corner wide.

A clear penalty was turned down when the referee failed to see a clear shove in the back on Henderson as a free-kick was played into the box.
As the clock wound down Speed was shown a straight Red Card for a scything tackle.

At the final whistle the Bears had been well eaten by an energetic Longridge side who should go on and have a good season.