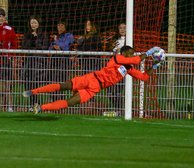 The Bears travelled to Whitchurch hoping to put Saturday’s defeat behind them and they did just that. Morris and Connor were back in defence and new signing Jonathan Beaumont started in midfield.

The home side were looking to go top of the table having three wins out of three under their belt, but the Bears had other ideas.

Whitchurch started strongly and created several chances as the Bears took time to settle and they opened the scoring after just 9 minutes. Ellison made a good save from Hughes, pushing the ball out for a corner. From the resulting corner Jud played the ball to the back post where Goddard headed back across goal and Hughes scored with a clinical header.

Both sides then knocked the ball around well and created a number of half chances, Paul Speed was unlucky with a swerving shot which the keeper managed to hang on to. Whitchurch then applied some serious pressure but the final shot from Campion went over.

Congleton were fighting back and saw much of the ball, but couldn’t create that clear opening..

The final chance of the half fell to Hughes but his tricky footwork didn’t help his finish as he fired wide.

Bev Burey replaced Keiron Brislen at half time for the Bears

Minutes into the second half and Morris was just in time to clear the ball as Hughes was about to shoot. The Bears then took the upper hand, pushing forward in search of the equaliser and Mini Adegbenro had a clear chance but fired high and wide with the goal, at his mercy.
Craig Ellison had to be on his mettle when Johns fired one in.

The Bears finally got what they deserved on 71 minutes, John Main having already had a couple of chances, hammered one from just outside the box leaving the home keeper with no chance.

The home side were stung into action and ramped up the pressure in search of the winner, Hughes again forcing Ellison into an excellent save from an acrobatic volley following a corner and then Dickin should have scored but stabbed the ball wide from close range.

Sub Jordan Lorde almost got the winner for the Bears on 89 minutes, with a 25 yard screamer then went just over the bar.

At the final whistle the Bears were extremely pleased with the result after the lacklustre display on Saturday, this was much more like the Bears of last season.

Next up, Winsford are at the Cheshire Silk 106.9 Stadium on MONDAY AFTERNOON