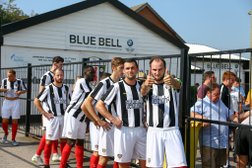 The Bears took on their Cheshire rivals hoping to achieve their first win of the season and a thrilling game was seen by a good Bank Holiday crowd.

The visitors started the stronger and opening the scoring after just three minutes. They won a corner and when the ball was floated in to the Bears six yard box where Anouro rose to head it past Craig Ellison. 1-0 Winsford.

Immediately the Bears were level in similar fashion. From the kick-off they moved up field and won a corner. Jonathan Beaumont got a great header to the cross and it was all square, 1-1.

Both sides now created chances and Jos Ryder did well to clear one and Dan Cope was unlucky not to get in a shot as he raced on goal.
It was proving to be a very even and open game, with both keepers being tested. The Bears though gained the advantage on 33 minutes. John Main took a corner, Saul Henderson headed it on and Dan Cope slide in to fire home, 2-1 Bears.

Now Winsford pushed and had chances which Tom Morris and Ryder doing well to clear, the latter almost got the Bears third when his header to a curling cross went just wide. Congleton finished the half the stronger with several chances from Mini Adegbenro and Main.
Half Time Congleton Town 2-1 Winsford United

The attacking flair of the first half continued with Henderson just missing out on a Main cross and then seeing the keeper grab another header. Morris made an excellent interception and started a move that saw Henderson, Cope and Adegbenro combine well but Winsford cleared.
The scores were level on 52 minutes when a cross into the Bears box was put past Ellison by one of his own defenders. Now it was all to play for and Henderson saw the keeper just beat him to a racing ball.

Winsford moved ahead on 57 minutes, Anouro once again finding the back of the net. 3-2 Winsford.

The Bears had thirty minutes to salvage something and it took a superb double save from Winsford keeper Langley to deny Adegbenro and Cope before Henderson shot into the side netting. Kieron Brislen saw a shot graze the cross bar and Cope headed over after Morris headed on.

On 83 minutes Brislen was fouled just outside the Winsford area. Main took the free-kick superbly, firing into the net just inside the right hand post, 3-3.

Bears brought on Jordan Lorde and Bev Burey and the latter made a great run, beating the defence and getting in a cross which saw Main shoot wide from close range.

With the game entering stoppage time, Burey became the Bears hero. He collected the ball thirty yards from goal, looked up and hammered a stinging shot past Langley, 4-3 Bears.

Minuyes the later the final whistle brought to and end the seven goal thriller.