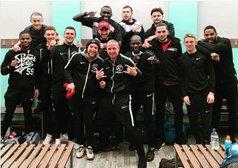 Bears Can’t Find a Winner at home to Burscough

The Bears were hoping for 3 points as they switched on their new floodlights for the first time and included new signing Sam Hadfield-Summerbee up front.

The Bears started well and created early pressure with Connors Taylor-Mountford creating chances but it was the visitors who scored the opener. A free-kick midway inside the Congleton half was played into the box and half cleared, it was played back in and Martland finished from just 6 yards out.

Cope had a couple of shots on goal but the keeper was equal to them and then he hit a rasper just wide of the post. A dangerous Bears cross was tipped out for a corner which was played in but fired wide. Ryder then put in a good block for the Bears and when the ball moved up field, passing between several players, it fell to Taylor-Mountford controlled it and found Cope who hit home equaliser from 10 yards. 1-1.

A series of Bears corners followed and Ryder went close with a header, just wide.

The Bears began the second half in control and moved the ball around well. Main got on the end of a Connor cross but his shot was blocked then it took a timely tackle from Ryder to break up a promising Burscough attack.

On 60 minutes Burscough were reduced to ten men when Presho was given a straight red card. The Bears now dominated play in their search for a winner and Speed hit one just over and Main brought out a good save from the keeper. There was a strong shout for a Bears penalty on 70 minutes when a corner came in but the ref wasn’t convinced. Ashton replaced the hard working Main to add fresh legs but it was the visitors who went close, a timely challenge by Griffith keeping them out then they hit the side netting from a free-kick.

Adegbenro replaced Connor for the final fifteen minutes and more pressure came from the Bears as Cope was just beaten to a thru ball then he ran on to one again but his shot hit the top of the cross-bar. It was all Bears as the clock ticked down and shots from Hadfield-Simmerbee and Cope almost snatched a dramatic winner but it was not to be.