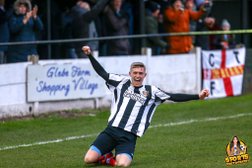 A first half goal from Arron Johns followed by a second half Aaron Bott hat-trick and a second for Johns saw the Bears pick up three vital points on the back of a strong performance against another team at the wrong end of the table.

The opening exchanges belonged to the visitors with a string of balls heading goalwards keeping Josh Ryder and Tom Morris busy at the heart of the Bears defence. Shots ranged in but Ben Chapman wasn’t called on to do anything spectacular.

It took until the 15th minute for the Bears to put together a decent attack, Will Booth firing just over the bar. The Bears then began to settle and put together a number of decent moves, Aaron Bott just being beaten to a low cross by the keeper. Kieron Brislen was working well down the right and put in a number of dangerous crosses.
On 23 minutes the deadlock was broken. An inswinging corner was cleared off the line by Hill, the clearance found Dan Cope who made a strong run and cross which was headed goalwards, deflected off the defender to Arron Johns standing on the goal line, giving home a simple tap in 1-0 Bears.

Strong runs from Bott and Cope were thwarted by smart defending and keeping whilst the visitors came close needing Ryder to get the clearance in. The ball came out to Cope who linked up well with Bott and Johns before the keeper saved smartly.

The Second half saw the Bears dominate, creating wave after wave of attacks. Bott went one-on-one with the keeper early on, just beaten by an outstretched leg before beginning a six minute hat-trick spree after 53 minutes.

His first was an 18 yard smasher which gave the keeper no chance. Two minutes later Johns put in the perfect cross which Bott volleyed home, 3-0. Three minutes later the hat-trick was completed when Johns charged in on goal, drew the keeper and squared to Bott who slotted into the empty net. 4-0 Bears.
The goal scoring was completed on 61 minutes when Johns got his second, walking the ball into the net after good work. 5-0 Bears.

Lee Cropper replaced Cope on 66 minutes and went close straight away, forcing a good save from the keeper and Ricky Bridge fired the rebound against the post.

Lewis Bergin replaced the threatening Sam Freakes with 15 to go. The visitors created very little and Chapman had some relatively easy catches to make. Final Bears sub saw Lee Pickerill on for Johns. Ryder twice went close in the last few minutes with headers and Cropper fired one over the bar.

Full Time and this had been a good team performance from the Bears with everyone contributing well.