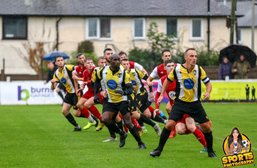 Bears Open the season with a late win

The 2020/21 league season finally got underway on Saturday and it was prove to be another late late show from the Bears which saw them seal all three points.

The opening exchanges saw the visitors with the upper hand, creating several half chances which Dave Parton in the Bears goal dealt with well. Ramwell had a great chance to put Gate ahead when Howarth found him open in the box but his shot went wide.

The opening goal came from the penalty spot on 18 mins, a ball into the Bears area struck a hand and Boyd made no mistake, firing past Parton, 0-1 Squires Gate.

Three minutes later a Bears free-kick was played into the box by Schofield, the ball was cleared but in the process a poor challenge saw the referee point to the spot and Arron Bott fired it into the right hand corner, 1-1. On the half hour Bott was unlucky when his shot came back off the post but ‘Gate were applying most pressure and fired one chance well over the bar. As the half closed, Jordan Johnson hit a free-kick goalwards but the keeper just managed to palm it away.

The rain continued to fall as the second half got underway and both sides created chances. A good ball from Eric Graves thru to Bott lead to a dangerous cross which took an excellent defensive clearance to prevent Johnson finishing at the far post.

The visitors were now having the better of the game and Parton was called on several times to keep the scores level. On 72 minutes a header by Westwood from a corner put ‘Gate in front and the Bears were staring at an opening day defeat, however, this team doesn’t know when the game is over and it was to be two subs who turned everything round. With two minutes of normal time remaining, Dan Cope collected the ball in the box, rounded the keeper and walked the ball into the empty net. Cue wild celebrations from the Bears faithful, but it wasn’t over yet.

They almost let it slip though a minute later when a ‘Gate free-kick just outside the box was fired wide of the post and then with the last action of the game, another attack saw the Bears clear the ball up field.

The final whistle brought huge celebrations as the Bears had come back from the dead to take all three points.

Team: Parton, Griffith, Swale, Graves, Duffy, Jepson, Williamson, Schofield, Bott (Fenton 90), Johns (Cope 71), Johnson (Beaumont 82)
Unused subs: Hadfield-Summerbee, Peters
The Bears should have been at Ashton Utd on Tuesday night but the game was postponed due a covid19 case at Ashton. This weekend it is a visit to Longridge.