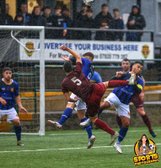 Great win and a dominant performance

Bears traveled to Oldham to face Avro this afternoon and a decent game was seen in atrocious conditions.

Bears started brightly and created some early pressure but Avro came into the game as the half progressed. Parton in the Bears game was rarely troubled, making a few regulation pickups from crosses. Jepson went close for the Bears, firing one just over.

On 40 minutes Pilkington opened the scoring for the home side, shooting from the left and seeing his shot take a wicked deflection off a Bears defender, leaving Parton with no chance.

Jordan Johnson leveled for the Bears right on half time, latching onto a loose ball in the area and firing home from 6 yards.
Half Time 1-1.
Bears came out for the second half with real determination and went for it from the off, bossing the midfield and getting the ball into the Avro area on several occasions.

Aaron Bott put the Bears in front on 54 minutes, Jonny Beaumont heading over the defensive line to Boot, who dummied a defender and placed the ball past the keeper.

Seven minutes later it was 3-1, Bott again, this time curling one into the far corner of the net from just inside the area.

Jonny Beaumont should have made it 4 when put in on the left, but fired just wide of the post

Bears were bossing the game and the defense looked as solid as a rock with Oliver Jepson and Richard Duffy commanding the middle and Josh Ryder (right back) and Chris Baker (left back) not letting the home side get a sniff. Eric Graves too looked really solid, even after receiving a few nasty whacks.

The win puts the Bears in a great position going into next weekend's FA Vase game at home to Gresley Rovers.