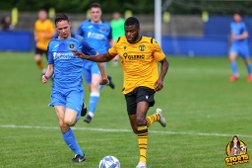 The Bears travelled to Lancashire on Saturday without a number of players through illness, injury and general unavailability.

They brought in new signing Daren Chadwick from Leek who proved to be the Bears hero, netting the equaliser in the last few minutes.
The game opened with Padiham having most of the early play and a few early forays into the Bears box created nothing but half chances which Parton dealt with easily. A series of home corners also brought them no joy. Jordi Nsaka, starting his first game for the Bears, put in a couple of good runs down the left, and one cross found Tom Pope but his header was gathered easily. More Bears pressure lead to a scramble in the Padiham six yard box and several players tried to get on the end of it, but Aaron Bott’s knock back was eventually hoofed clear.
The Bears lost Ollie Jepson on 26 minutes when he pulled up, he was replaced by manager Richard Duffy, himself coming back from injury.
On 33 minutes a ball down the Bears right found Arron Johns, he crossed and Pope headed back across goal, in attempting to clear the ball the defender clearly used his arm to control it and the penalty was awarded. Pope stepped up and sent the keeper the wrong way, 1-0 Bears.
Five minutes later the scores were level. A Padiham break down the left saw a cross in and Thompson’s leap beat Parton to the ball, 1-1. Final action saw Jordan Johnson almost put through by Bott but keeper was out quickly.
Half Time Padiham 1-1 Congleton Town
The second half was to prove to be an interesting 45 minutes with some strange refereeing decisions adding to the fun!
A great break by Padiham down the right saw Antony Griffith get beaten out wide, the attacker continued and the final shot whistled just over the bar. Bott should have put the Bears ahead minutes later when he was put through with only the keeper to beat, but his effort was blocked.
The Bears were now definitely having the better of the half and the side was staring to gel nicely. Chadwick went closest with a diving header from a corner which went just wide. How Padiham didn’t score on 70 minutes the watching faithful had no idea, the ball into the box only needed taping in but was fired over!
A minute later a controversial decision. Duffy put in a good challenge inside the Bears area and the ball deflected to Parton. The referee deemed it a back pass and awarded the free-kick. Much Bears protesting. The free-kick was hit goalwards but rebounded, however, Ryan McKenna hammered it home through a sea of legs leaving Parton unsighted. Duffy continued to contest the decision and was sent to the sin bin for ten minutes.
The signs were not looking good but the Bears continued to push and were level on 78 when a ball crossed low into the box was turned in by Bott, who took it out of the goalkeepers clutches. 2-2. More drama followed a few minutes later when Padiham retook the lead. Another break down the left saw a deep cross find Marcus Perry unmarked at the far post and he had an easy tap in. 3-2 Padiham.
The Bears continued to press and amazingly got the equaliser on 87 minutes. Peter Williams played a perfect corner into the area and Chadwick was there to fire home. 3-3. The final minute saw Daniel Needham pull up with an injury and assistant manager Micky Morton come on for his debut – not sure he was keen, but he manfully made a couple of chasing runs into the Padiham half.
The full time whistle brought to an end an entertaining game and honours even, though the Bears will feel they should have had all three points.
Team: Parton, Griffith, Needham (Morton 88), Williams, Chadwick, Jepson (Duffy 26), Bott, Johnson, Pope, Johns, Nsaka.
Share via
FacebookTwitter
https://www.pitchero.com/clubs
Recent news