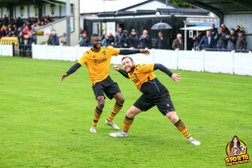 Never was ‘a game of two halves’ more relevant than at the Silk 106.9 Stadium last Saturday.

The Bears included new signing Ethan Hartshorn in their starting eleven as they looked to cover multiple injury absences.
The first half was a very tight affair with both sides creating chances and the Bears custodian, Dave Parton pulling off several comfortable saves. A number of half chances went begging for both sides but nothing really threatening. The stalemate was not a sign of things to come in the second half.
Half time Congleton Town 0-0 AFC Liverpool
It took just two minutes of the second half for The Bears to take the lead. Tom Pope found Dan Cope on the edge of the box and he smashed the ball home, celebrating his first goal of the season with his customary summersault. A minute later Parton pulled off a superb save but could do nothing on 52 minutes. Brad Owens found Kyle Schorah in the box and his spin and shot flew into the net.
Parity did not last long, Arron Johns played in a perfect cross and Ethan Hartshorn fired home for his first Bears goal on his debut, 2-1.
The floodgates were now open and it took just another five minutes for the Bears third. Cope had a shot blocked and the ball rebounded to Jordi Nsaka who shot from 30 yards, leaving the keeper stranded.
AFC Liverpool did not give up and continued to press forward but they had little answer to the Bears attacking play and things got worse for them on 67 minutes. Pope made a break on the left wing, then combined well with Nsaka, he crossed to Jordan Johnson who fed Cope and he finished well from close range, 4-1. Parton made a great save a few minutes later, tipping a free-kick around the post.
The fifth came after more Bears pressure on the 78th minute, this time Nsaka found Johnson and he fired home, 5-1.
AFC Liverpool continued to push and several chances saw Parton called into action. The final goal came as the game entered the last five minutes. Pope controlled the ball well and fed through to Johns, whose first time shot whistled past the keeper, 6-1.
It was almost seven a few minutes later, a great run from Johns on the left wing saw a neat cross to Pope but the defence blocked his shot.
The final whistle brought to an end a game that left the Bears faithful almost speechless. Seven goals in the second half – have to check the record books for the last time that happened. AFC Liverpool simply could not handle the Bears attacking play, led by Tom Pope, and the pace and efficiency of the forward play. That is not to say Liverpool did not contribute – indeed, they never stopped attacking, but their attempts on goal were easily dealt with.
Full Time Congleton Town 6-1 AFC Liverpool. Attendance 266, Bears MoM Dave Parton
Team: Parton, Faulkener, Nsaka, Hartshorn, Duffy, Lycett (Jepson 80), Cope (Barton 90), Williams, Pope, Johnson, Johns
Subs: Zola, Fenton Booth
Share via
FacebookTwitter
https://www.pitchero.com/clubs
Recent news