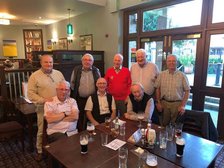 We have been informed of the death of Ernie Hopps earlier this week.

We have been informed of the death of Ernie Hopps earlier this week. Ernie bravely bore motor neurone disease, which progressively led to muscle weakness. He has been very poorly and died on Monday 22 June.

In 1965, Consett welcomed a number of new first-time players who were then in their 20s. Ernie arrived at the Club with Geoff Carlill, Willie Allanson, Bob Bell, Tot Murray. Charlie Smith followed them a couple of months later. Ernie worked at the Company (Consett Iron Company, later British Steel). He later left the Company for farming. For many years he lived in Whittonstall and later farmed at Medomsley and the Hat & Feather. More recently he has lived in Ebchester.

Ernie was 75 on 25 August 2019. He was a strong man; a stocky and formidable scrum half. He was always wholly committed. Facing heavier or taller or opponents held no fear for Ernie. He would run directly at them… and leave them wondering which way he went.
On 21 August last year, a few of the Tups celebrated his birthday with him at Wetherspoons, Consett.