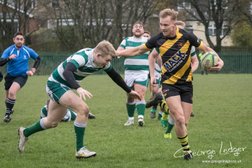 back into the swing of things
Barry Cook

After a week's fixture break, Consett returned home to play table toppers Penrith. The team were up for the game despite some interesting team changes. They were up against a team who are well clear at the top along with Morpeth, either one should/could win the league this season.

The wind was strong and blowing towards the Villa Real end. Penrith were the first to score a try as they played with the wind but the conversion was missed. Consett were finding it difficult against the wind but after some really good work from Kevin Slow they were soon back in the game with an unconverted try.

As expected from the top Cumbrian side they were skillful across the board and well coached and drilled. They were 30pts up at the end of the 1st half and Consett only had the Slow try to their name.

With the benefit of the wind in the second half Consett were able to spend more time in the Penrith half and the visitors only managed two more tries, both through Consett errors. However Consett did also get another try, again through the individual efforts of Slow who scored between the posts, the extra points were added by Geyer.

Moving into the 2nd half of the season Consett travel to South Shields Westoe next week, a team they drew at home against earlier in the season. Consett need the league points as they want to move above Westoe in the league and draw clear of the bottom few teams in the table.

Kevin was understandably voted Man of the Match by Penrith for his try scoring antics and the hope is that Consett can build on this for next week's game.

Roll on next week.