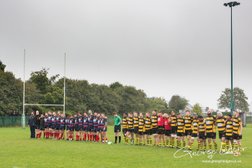 First home game of the season. Both teams pay their respects to her late Majesty

For her late Majesty

After a sad week for the Nation. Rugby in Consett paid it's tribute to the late Queen Elizabeth II, prior to playing the first home game of the season, both teams and the large crowd paid their respects to her late majesty with a minutes silence prior to the Kick Off.

In difficult conditions both teams scrapped for possession with South Shields Westoe scoring 2 break away tries, both from Consett handling mistakes. Although Consett failed to cross the white wash, Fly Half Matty Grimes won the kicking game with 4 penalties whilst Westoe struggled with their kicking game. In the end both teams shared the points which was probably a fair result.

Consett MOM as picked by the Westoe team was Matty Grimes.

As usual the George Ledger recorded the match with his excellent match photos. They can be obtained from George on ledger.george@gmail.com