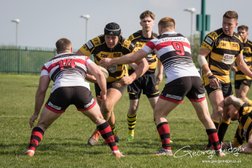 given a Rugby lesson

In the last league game Saturday of the season Consett were taught a Rugby lesson by what turned out to be the new league champions.

At opposite ends of the table Consett and Ilkley took to the Amethyst Park pitch for the last time this season. Consett opened their season down at Ilkley and knew what they would be up against after leaving with a heavy defeat. According to the ample Ilkley support and their coach this was the best team they had put out this season!!

This showed right from the start with Consett having no answer to the power, speed and organisation of the Champions in waiting. Throughout the game they scored at regular intervals, from any position on the field. There was plenty of effort from the inexperienced Consett team and they never let their 'heads drop' and it was good to know for the future that the younger elements of the team will have gain a valuable experience from such a game as they in particular kept going to the very end. If there is a lesson to be gained from such a game the players now know what it takes to compete and to be successful at this level.

Ilkley kept their 'foot to the metal' right till the end thinking that they required a huge score to aid their league title bid. However this wouldn't be the case as their top of the table challenges Driffield lost their game at Scarborough and Ilkley quite rightly celebrated hard and probably well into the night their league championship.

The champions deserved everything they got from this match and from the rest of the season and they certainly saved their best for the last league game. Consett now need to pick themselves up for their final run out of the season against Hartlepool Rovers in the County Intermediate Cup final to be played at Durham City.

Again, official club photographer George Ledger was on hand to record the action and the gallery of match photos can be found here and for those wanting official copies George can be contacted on this email address.