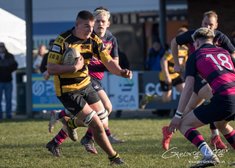 Tries Galore as Consett just go down against Moortown

plenty of tries in the sunshine

On the final run in to the season the sun was shining and Consett and Moortown gave the crowd plenty of tries to enjoy.

Spoilt only by a strong crosswind both teams were in the mood to play an open game. As usual George Ledger was on hand to record the match action along with other members of the camera club, and there was plenty of action to record. Check out George's latest album. The album contains a few images of young Ayden Knott promoted from the colts and making his debut in an unfamiliar position. In no way did he look out of place in an evenly matched forward battle between the two teams.

Moortown's skilful and speedy backs looked to run the ball at every opportunity and Consett, not to be outdone, used the ball that they had in a 'full court' fashion. Unfortunately Consett only gained one try scoring league point from the game, just failing to get a losing bonus point towards the end.

Great photos, and a great entertaining match. Consett look forward to the home derby against Durham City next week which is preceded by a Memorial Lunch for all ex players who passed away during the Covid period. Make next week a date!!