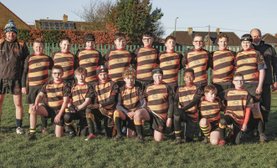 A good attendance at Westoe saw Consett bringing 10 players to this competition.

We were placed in group C and paired against Barnard Castle, Blaydon, Durham and Yarm.

The opening game against Barnard Castle was pretty much one sided with Barnard Castle dominating in most areas. The team were complemented by the referee however on the effort put in and he conceded that the scoreline did not reflect the true picture played in front of us.

Next game against Blaydon and after the warm up against Barny, Consett came out fighting and played a blinder, resulting in a draw which really should have been a win, massive team effort.

The next two games saw us suffer marginal defeats too Durham City & Yarm.

Despite leaving with only the 1 point from a possible 8 we took a lot of positives from the games. This was only the 2nd game played by the team and the tackling, drive and enthusiasm was awesome.