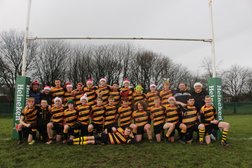 Consett welcomed Chester to Belle Vue for our first game in a month due to a number of cancellations. This had given us a good opportunity to work with the lads in training on a number of areas where we thought we could improve and the lads were looking forward to putting all of this hard work in training into a game situation. Chester had a few injuries in the run up to the game and could only field 13 players so it was decided between both coaches to drop the flankers and play a 13 a-side game. As a result, we decided to re-shuffle the back line and play Brad and Dover in the centres for the start of the game to see how it went so our starting line-up was; 1. Scott Redshaw 2.Joe Hull 3.Ciaran Horgan 4.Ethan Philips 5.Matthew Gunnion 8.Christy Wood 9.Nathan Williamson 10.Daniel Smith 11.Bailey Hughes 12.Bradley Smith 13.Keiran Dover 14.Joe ‘Gingey’ Charlton 15.Dillan Telford with the replacements being Conall Ruddick, Alex Jackson, Josh Jelly and Matthew Lovett.

We had told the lads before kick that as we had the luxury of a few options on the bench (which we don’t normally have!) we would rotate the team as much as possible to ensure that everyone stayed fresh, we could try people in different positions in a game situation and that everyone would get at least a full half of rugby. We started strong and were quickly on the offensive. This paid off as we raced into a 26-0 lead within the first 15 minutes through trys from Joe, Brad, Nathan and Dover with Dan getting 3 of the conversions. We used this as an opportunity to make some changes and revert back to our usual centre pairing of Alex and Gingey with Josh coming on the wing and Brad and Dover coming off. We added a further try through Joe picking and going off the back of ruck and powering past the defence to cross the whitewash. We made another change with Conall coming on for Joe, with Ciaran moving to hooker. We scored our best try of the day through Bailey, with the backs working the ball wide well, creating an overlap for Bailey to exploit brilliantly with his pace down the wing to get the try in the corner. Both this and the conversion from Joe’s try were missed so we went into the half time break with a 36-0 lead.

The half time message was that we needed to start playing more as a team. We had been playing as individuals and going on our own without support far too much in the first half and we had to use the second half as an opportunity to put the work we had been putting in at training regarding backs moves into a game situation. It’s one thing doing moves in training but this was the perfect opportunity to do it against decent opposition. We made some further changes with Matthew L. coming on for Bailey and Joe coming back on for Christy.

All credit to Chester, they never let their heads drop all game and they came flying out of the blocks at the start of the second half and had us on the back foot for 5 minutes or so before their pressure paid off and they got the try their efforts deserved, with the conversion being missed the score was 36-5. This gave Chester confidence as they continued to put us under pressure in the early stages of the second half. We regained our composure and got back to basics and started to compete again at the breakdown, with Nathan starting to control the play well again from scrum half. This got us back on an attacking foot and we added to our points total with two trys from Gingey with both conversions missed, making the score 46-5. Chester hit back quickly following a number of penalties which they used to tap and go and we didn’t defend well as a line making it easy for them to make it 46-10. We brought Brad and Dover back on for Alex and Gingey in the centres and Christy on for Ethan for the final 15 minutes. This resulted in us getting a further 2 trys through Dover and Dan with one conversion made making the final score 58-10.

Whilst the scoreline was convincing, Chris, James and myself felt that the team performance was not quite there. We had asked the lads to try moves we had worked on in training and this never happened throughout the game. We had also done a lot work with the lads recently on drawing the man and creating overlaps and apart from Baileys try, this did not happen either. We scored some good trys from going through phases, picking and going but we all know that the lads are good at this so we want to try to add a different dimension to our game and disappointingly the lads did not listen to our instructions. The game on a Sunday is the final stage of a lot of hard work on a Tuesday and Thursday night at training and this is where the spectators see things differently to the coaches. Yes, it was a good win in terms of the scoreline but it is frustrating for the coaches to see the lads doing moves and drills brilliantly in training but then not taking that into a game situation. It is the game on a Sunday that will see the lads develop as players and whilst they have made massive strides over the last 12 months, they need to start learning more about the game and to make it easier for themselves to play rugby. There was still plenty of positives to take from the game, it was good to see lads playing in unfamiliar positions which will give us options for the future. To be fair to the likes of Brad, Dover, Christy and Joe who came off for periods of this game, they have nailed down their respective positions and we all know how good they can be on their day so it was good to give other players a chance to show what they can do in those positions as we have not got the biggest squad and we need a degree of flexibility with regard to playing positions to cover injuries or players being unavailable. With regard to our play, we were doing the hard work by getting ourselves into goods positions so we just need to start identifying these situations and making the most of them.

Now to Man of the Match. Dillan had by far his best game for the team at full back today. After he took an early take from a high kick, you could see him growing in confidence and he made a number of powerful carries from the back and covered well defensively. Whilst Dillan put in a good performance he was pipped to man of the match by Nathan at scrum half. He really controlled the game well and did what we asked of him by releasing the backs excellently all game. For a little lad, he is not scared of getting stuck in either and he made a number of brilliant tackles throughout the game and rounded off his performance with a well taken try off a Christy offload (yes, you did read that right, a Christy offload!!).

Well done on the win lads, lets have a good weeks training and start to make sure we put our training efforts into game situations.