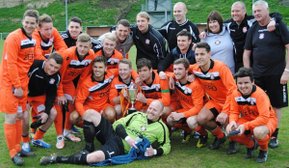 Conwy capped the season off in style by adding silverware to the trophy cabinet to go along with a well-earned third place league finish.

The game was won in a manner that the Conwy faithful have been accustomed to this season - via a penalty shoot-out - and again for an incredible fifth time this season it was keeper Terry McCormick who pulled off the stops to set up Josh Griffiths to slot home the winning penalty.

The cup win left manager Chris Herbert delighted at the end of the game: “At the start of the season the aim is always to try and win trophies and we’ve come away with some silverware, which is a massive achievement for the club in a building season.”

Credit to Caersws who were tough opponents but Conwy had enough chances in the first half to have won more than one game. The second half & extra time saw a much more evenly contested affair and in the end, after winning four previous shoot-outs this season, the men in tangerine would probably of settled for the penalty shoot-out.

“A lot of credit to Caersws who made life very difficult” said Herbert: “We dominated the first 30 minutes but we never took the chances to put them to bed. If you don’t take your chances you’re going to make life difficult for yourself. But at the end of the day, it’s a cup game and I said to the lads at the end it doesn’t really matter how you do it, as long as you come out victorious in the end, and we did.”

Conwy dominated possession early on with the experienced Jimmy Kelly pulling the strings in midfield. After a sweeping move, a cross into the box by Conwy’s Mike Jukes found Ellams but he miscued his shot totally with the goal at his mercy. Good work by Ellams again on the edge of the box cued up Desormeaux but his shot went over. Jukes then hit the post with a shot across the keeper, the ball fell to Josh Griffiths who blasted the rebound over the bar. Moments later Ellams waltzed into the box and got his shot off but again the ball flew over the bar. A great ball over the top found Mike Jukes through on goal but he was brought down by the Caersws defender who was only shown a yellow card. The resultant free-kick was fired into the wall by Ellams and the first half somehow finished goalless.

The second half was a more even affair as Caersws upped the ante. Conwy’s best chance fell to Danny Desormeaux who found himself through on goal but his shot was well saved at close range
Caersws were starting to apply some real pressure but found Terry McCormick dealing with everything thrown into the box. The game finished 0-0 after 90 minutes and went into extra time. The pace of the game had slowed down with real chances few and far between so after a goalless 120 minutes of open play it was down to a penalty shoot-out to decide the outcome.

Conwy penalty-king Terry McCormick got to work straight away to save Caersws’s first penalty to put the tangerines in the driving seat. Anthony Miley and Mike Jukes made it 2-1 before the Caersws keeper Dave Jones stepped up to make it 2-2.

Karl Dunbar made it 3-2 to Conwy before Terry McCormick pulled off another penalty save. But then Jimmy Kelly and Lloyd Ellams both missed their kicks which took the shoot-out into sudden death with the score tied at 3-3.

Caersws missed their first sudden death kick which presented another opportunity for Conwy to clinch the trophy. As in the semi-final against Flint, up stepped Josh Griffiths to slot his penalty home to jubilant scenes as Borough secured the trophy.

Borough captain Danny Desormeaux was chosen as “man of the match” by the leagues match guest & former Chelsea player, Frank Sinclair, and the tangerines midfielder felt it was a win that his side deserved: “First half I thought we were brilliant and had a number of chances to put the game to bed. In the second half they (Caersws) got into the game which gave them some hope and was a tight game after that but I think we deserved it overall.”

“We’re pretty good at penalty shoot outs and Terry is top drawer at saving them … thankfully, I was about the tenth in line to take one!!!”

“We’ve finished third and won a cup so its been a successful season. I think with a good pre-season behind us and a couple of additions to the squad well be right up there next year.”

Herbert was also full of praise for other members of his side “I’d agree with Danny as “Man of the Match” but Terry was superb again today and has got us through nearly every round and was the hero again in the shoot-out. Jimmy Kelly and Steve Cunningham were also outstanding for us today.”

Herbert is already looking to build upon his first season as manager at Y Morfa with plans already moving forward for next season:

“People know we are a club going places and we’ve now got people coming to us who want to join which is a big change in the space of a year!”.

“I’m made up with what we have done as a club this season and what we have achieved. Next season, we want to push on further with the squad we’ve got and with the addition of one or two more faces we'll hopefully go one step further.”