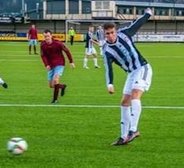 Peter Jones joins from Llandudno where he has been for a number of years, coming through their academy system. The tall and pacy 19-year-old former Ysgol Aberconwy pupil has also represented the North Wales Coast, Welsh Schools U18's and had trials at Manchester United and represents a major coup for the club.

The youngster, who has turned down other offers in order to join the Tangerines, found his starting opportunities limited at Maesdu Park last season but still managed 9 goals including one against Conwy in the derby fixture at Y Morfa.

Also signed is another speedy forward in 24-year-old Andreas Alverado who scored 17 goals for Kinmel Bay in the Welsh Alliance last season despite missing 3 months of the season with injury. He has also represented Wales in the UEFA Regions Cup held in Macedonia in 2012.

Conwy Borough manager Aden Shannon said "Pete Jones is a great signing, he has pace to burn and is a real talent and I am sure he will score goals for fun in this league."

"Alverado is another fast, young player who we have been keeping tabs on for a while. I'm made up to have him on board."