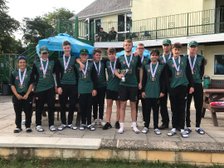 Luke Curtis leads his team to a double headed victory over South Wilts on Finals Day.

Corsham Cricket Club were happy to host the Finals in the Wiltshire Leg of the 'Vitality U19 National Club Cricket Championship' on Sunday 18th August where the Club's Under 19 XI led by Captain Luke Curtis played South Wilts U19 in a double headed T20 format.

In the event many of the group fixtures were lost to bad weather, but CORSHAM and SOUTH WILTS by virtue of wins against all their other divisional members were invited to play each other in the Finals day. There is no record of the results of any of the matches in the North group, and whether there was a winner of that group, but the Finals Day went ahead last Sunday with CORSHAM and SOUTH WILTS playing each other twice to determine the Wiltshire Regional Winner.

In the first match, South Wilts set a formidable target of 150 for 4 with Wiltshire CCC player, JACK STEARMAN retiring on 51, and HENRY SMITH 41. CALLUM SANDELL and ED VICKERY were the pick of the Corsham bowlers taking two wickets each.

Undaunted by the testing total, Captain LUKE CURTIS hit a half century before retiring, while JACK HUMPHREYS followed his Saturday League century with an undefeated 45 to see Corsham home with just over three overs remaining.

The second match saw a much tighter game with South Wilts restricted to 104 for 8 in their 20 overs. JACK HUMPHREYS took 3 for 24, while there were two wickets apiece for CALLUM SANDELL and JOSH STANLEY including the prize wicket of STEARMAN for 10. JAMES WADE top scored for South Wilts with 26.

Following the early loss of CHARLEY REED, LUKE CURTIS again led from the front scoring an undefeated 43 as Corsham chased down the modest total for the loss of four wickets with ten balls remaining.