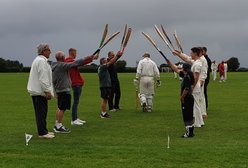 Rob Shillaker calls a halt to his illustrious playing career

Given a 'Guard of Honour' by team mates

Corsham veteran, ROB SHILLAKER has called a halt to his illustrious playing career at Corsham with a sparkling 84 runs for the 3rd XI at Leafy Lane against Nationwide House 2nds in the final league game of the season.

Having made his playing debut in the late 1970s, Rob has been an ever-present player and has played in every Corsham team at some time in his career.

As a measure of the respect in which Rob is held within the club, his team mates lined up in a Guard of Honour as he took to the field for his final innings.

All at the Club wish Rob well in whatever he decides to do on Saturday afternoons in the future.