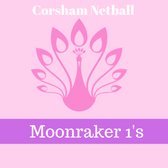 And it was great to watch.

Now anyone who has played in the moonraker league knows that Devizes is known for its sub-zero temperatures and in climate weather, well it couldn't have been more different last Thursday. The evening was wonderful and it was perfect conditions to play.

From the off Corsham were upbeat and pushing Wessex Blades, we took an early lead and settled into the game quickly, so much that this caught Wessex off guard and we had the chance to play some lovely netball. Wessex were just above us in the league going into the game and so we couldn't be too surprised that come towards the end of the first quarter they got into the game and pushed us back. But we held on and came into the first break 2 goals in front.

Knowing how we started and the intensity we had and knowing we got pushed back towards the end of the quarter we knew it was a case of pushing for the full 15 minutes and not letting our standards drop. This mantra worked in the second quarter and we went on to lead by 10 going into half-time. Some of this had to be down to Wessex changing up their shooting circle sending their Goal Attack to Goal Defence to try and stop Laura, it didn't work. Laura was still on fire and outplayed the attempts to block her out of the circle.

Jill wanted us to ensure we kept them from getting any points as they are so close to us in the league so we knew we had to continue and push it out even further to get them out of the points. In the third quarter, we stopped their good shooters (which they had now switched back) to just 7 goals in this quarter, which then combined with our shooters putting another 10 on the board meant we were now really stretching our lead.

Going into the last quarter it was for us to now really make a difference to our goal difference in the league and we knew we could as our shooters were on fire and yet again added another 10 goals to scoreboard, ending the game 48-32 winners giving us a 16 goal difference.

POM - Alice Wilson - it is no surprise that Alice has once again gained POM, she is consistently a threat to all of our opponents. Her height advantage and then her pin point passing its great to watch and to be on her team. The connection Alice, Emily, Laura and Lyndsey had in this match mad a real difference to our end result.