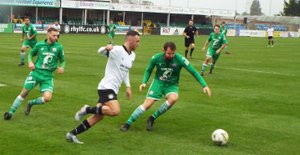 Corwen made the trip to the seaside to take on Rhyl in the great surroundings of the Belle Vue Stadium. Despite the recent wet weather the Belle Vue pitch was in magnificent condition.

Early on in the game the hosts played a deep cross into the Corwen box, where Asa Hamilton got his head to the ball, but couldn’t get enough power into his header, meaning it was just catching practice for keeper Dylan Jones.

At the other end Corwen had a shout for a penalty for a challenge on Iorweth Jones, but the play continued and the ball was played out to Scott Evans, whose shot from distance went over the bar.

A few minutes later the ball dropped nicely for Corwen’s Dale Davies, who took a touch before shooting at goal, but saw his effort blocked.

On the half-hour mark Rhyl’s Aaron Hassall when for goal from thirty yards, but he saw his shot ping narrowly wide of the post.

Joe Williams collected the ball from a throw in and played a threw ball into Dale’s path; however there was too much pace on the ball for Dale to collect it.

A minute later the referee made good use of the advantage rule to allow Rhyl to continue an attack, which saw the ball go through to Asa Hamilton, who saw his shot smash against the bar.

It looked as if the scores were going to be level going into the interval until a minute before the break when Dylan was able to make a save, but saw the rebound go into the path of Samuel Molyneux, who toe poked the ball into the back of the net from close range.

Corwen were awarded a free kick shortly after the restart, which Scott launched into the danger area, where Matthew Williams was able to get his head to the ball, but sent it over the bar.

Aaron Hassall looked to double his side’s lead with a shot from within the eighteen yard box, but he sent his effort narrowly wide of the post.

The away side were awarded a free kick in a dangerous position, which Scott and Joe both stood over, but it was Scott that opted to take it and he sent the ball just wide of the post from twenty-five yards.

Asa Hamilton chased down a long ball and got into firing range, but he was unable to celebrate as he sent his angled shot into the side netting.

Just before the hour mark the ball was collected by James Murphy just inside the penalty area where his sent a powerful shot into the back of the net to double the Lilywhites advantage.

It wasn’t long until the home side put the result beyond doubt, as two minutes later the ball was floated into the Corwen box, where Thomas Creamer got the slightest of glances on to the ball to head the ball into the back of the net.

The visitors went in search of a consolation goal as Tom Williams floated a shot at goal from twenty-five yards out, which went just over the crossbar.

The home side made it four-nil with just over ten minutes to play when the ball was played over to Thomas Creamer who had a great first touch to control the ball, which he played across to Samuel Molyneux, who slotted the ball home.

Corwen’s final attempt of getting on the score sheet came when Eilir Edwards went for goal from distance, but he could only send his tame effort straight at keeper Mitchell Jones.