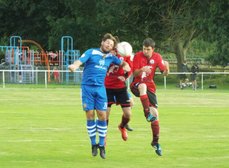 Nobody would have thought when Corwen left the War Memorial Park field on the 1st of February 2020 against Bangor City that they would not take to the same field again until the 4th of August 2021, a full 551 days later. The opponents after the long hiatus were another team playing in blue in the form of Chirk AAA.

The hosts got out of the traps quickly, with Tom Williams bearing down on the Chirk goal; however he could only send his shot over the bar.

At the other end Mathew Thomas saw an effort cleared off the line from a Chirk corner.

With thirteen minutes on the clock and after the referee played advantage Corwen captain Scott Evans tried his luck from distance, but he saw his effort deflect over the cross bar.

In the twenty seventh minute the visitors failed to clear their lines, allowing Ton Williams to collect the ball and run towards goal, where he dinked the ball over a defender and saw the ball go narrowly over the bar. From the goal kick Chirk started an attack and put a great move together, which bear fruit ball when the ball fell to the feet of Mathew Thomas, who blasted a shot into the far corner of the net.

Seven minutes later Chirk doubled their advantage, when despite James Mallon saving an initial shot he was helpless when the rebound fell at the feet of Jack Edwards, who had a tap in to make the score 2-0.

Whatever the Corwen management team had discussed with the players during the interval went out of the window very quickly, as twenty-two second after the restart Lewis Clamp found the top corner of the net with a rocket of a shot from the edge of the box.

Just before the hour mark the visitors played the ball out from the back and the ball was played into the box, where Louie Middlehurst got to the ball in mid-air, forcing James Mallon to tip the ball over the bar. From the resulting corner Mathew Thomas was able the head the ball home at the far post to make the score 4-0.

The home side looked to get what would only be a consolation goal when a short corner was played to Kevin Day, who curled his shot wide of the target. The next chance for Corwen came when they put a quick move together and the ball fell to Owen Cordiner, who saw his effort saved by Callum Thurnham.

Owen had another attempt at goal when Kevin Day pulled the ball back to him; however he sent his shot into the side netting.

As the game headed towards the final ten minutes Alistair Gibson got through on goal on pinged a shot beyond James Mallon and looked certain to be finding the back of the net, only for the ball to clip the inside of the post, allowing James to pounce on to the loose ball.

Owen Cordiner looked to pull a goal back for Corwen in the closing stages as he got his head on to the end of a Scott Evans corner; however Callum Thurnham was able to make the save.

Goal
With a minute of the ninety to play the away side rubbed salt into the wound as Alistair Gibson was able to get past Sion Dolben Hughes and give the ball to Mathew Thomas, who found the back of the net to complete his hat-trick.