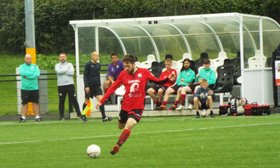 Corwen’s first game at their temporary home on the 3G surface at Maes Tegid, Bala, saw them host Berriew. The last time the sides met was in the 2019/20 Nathaniel MG cup, when Corwen won 2-0 at Berriew.

The home side had most of the opening play, with Kel Davies collecting a ball played across by Scott Evans, but he sent his resulting shot over the bar. This was followed by Jack Gregory shooting from the edge of the box and seeing his shot parried by goalkeeper Ryan Edkins, who was able to recover as Owen Cordiner was chasing the loose ball.

The deadlock was broken on the quarter of an hour mark as Joseph Haycock picked the ball up on the wing before cutting inside an pinging a shot from the edge of the box into the bottom corner.

Two minutes later the visitors hit the cross bar before doubling their advantage in the twenty-second minute as Edward Baker found the back of the net.

Fifteen minutes later Corwen halved the deficit as they pressed the Berriew defence and Kevin Day ran into a crowded Berriew box before powering a shot beyond Ryan Edkins.

In first half stoppage time Ryan Billington intercepted a pass before playing a quick one-two with Owen Cordiner and running forty yards with the ball and then playing a left footed cross into the box, where Owen Cordiner hit a first time volley into the back of net in a candidate for goal of the season. The goal proved to be the last kick of the half.

After the break Ryan Billington played in Scott Evans who saw his shot parried by Ryan Edkins, who was helpless as the ball fell to Owen Cordiner, who made no mistake as he gave his side the lead.

The home side doubled their advantage on the hour mark, as Ryan Billington passed the ball to Scott Evans, who went for goal with a half-volley from distance, which went over the Berriew keeper and into the back of the net.

Berriew looked for a way back into the game as William Morgan went for goal from a free kick, but he sent his effort high and wide of the target.

The hosts looked for a fifth goal as Tom Williams played a low across the goal from near the touch line, which Owen Cordiner back heeled towards goal, but saw the ball take a deflection and go out for a corner. From the corner Ryan Billington connected with the ball from a diving header, but saw his effort go narrowly wide.

As the game entered the final ten minutes William Morgan saw his free kick headed clear, sparking a Corwen counter attack, which ended when Scott Evans brought a good save out of Ryan Edkins.

With ten minutes to play Berriew put together a series of short passes, which lead to the ball finding its way to George Mitten, who blasted the ball over the bar.

In the eighty-fourth minute a cross was played into the Corwen box, where William Morgan ghosted past the Corwen defence to collect the ball and go for goal, but he could only bring a save out of David Walsh, who started a Corwen break, which came to fruition when Kevin Day placed the ball into the back of the net.

Two minutes later Berriew put a quick mover together, which saws a shot hit the crossbar and headed home by Joseph Haycock as he stooped to get his head on to the rebound to cut Corwen’s advantage to two goals.

The goal sparked a flurry of action, as the visitors hit the post before being awarded a ninetieth minute penalty. Craig Pearce was given the responsibility from twelve yards, but David Walsh, who had faced six penalties in the shoot against Chirk AAA the week before, did not need to make a save as the ball smashed against the bar.

As the game entered the ninth minute of stoppage time Joseph Haycock completed his hat-trick with a good finish and cut Corwen’s lead to one; however his side ran out of time to complete a comeback and salvage a point from the game.