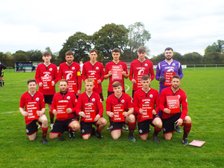 After three defeats on the bounce Corwen were looking to bounce back when they made the trip to Foxen Manor to take on Four Crosses.

The game took place on a chilly, but dry day on a nice playing surface, which allowed both teams to play some good football at times.

The away side got out of the traps early and looked as if they were going to take the lead in the second minute; however goalkeeper George Lawrence was able to pounce on the ball on the goal line.

The deadlock was broken in the eighteenth minute as the home side played the ball forward from a throw in and their attack saw the ball played to Will Howard who fired the ball home.

From the kick off Corwen went for the jugular and the ball was crossed to Kevin Day, whose shot was diverted on to the post by the fingertips of George Lawrence; however Kevin was on hand to head the ball into the back of the net from the rebound to level the scores.

The away side took the lead in the thirty-second minute as Sion Roberts started a move by playing the ball out from the back. The ball found its way to Tom Williams, who went past two defenders before crossing the ball to Kevin Day, who was able to send his shot into the back of the net.

Corwen looked to double their advantage when James Davies crossed the ball to Owen Cordiner, who couldn’t get a shot away as the ball got stuck under his feet in the six yard box.

After the break the home side looked for an equaliser as they hit their visitors with a quick attack, which ended when goalkeeper Josh Williams was able to pull off a good save from a low shot.

At the other end Owen Cordiner went past Thomas Ellis and crossed the ball towards Kevin Day, who tried to complete his hat-trick with a cheeky back heel, but his effort went narrowly wide.

Owen went for goal himself a couple of minutes later as he found some space in the box, but blasted his shot over the bar.

On the hour mark Curtis Weetman went for goal from a snapshot from the edge of the Corwen box, but he saw his effort saved by Josh Williams.

With quarter of an hour to play Thomas Evans played the ball to Curtis Weetman, who in turn played it on to Will Howard who pinged his shot wide of the far post.

It looked as if the home side were going to level the scores when Byron Edwards got beyond the Corwen defence, forcing Josh Williams to come sprinting off his line to challenge his opponent and Josh must have done enough, as Byron sent his shot just wide of the target.

Corwen looked to seal the points as a Tom Williams corner found its way out to Jack Rodgers, who sent his shot from outside the box over the bar.

With three minutes to play Four Crosses stole the ball in midfield and played the ball to Byron Edwards, who saw his shot gathered by Josh Williams.

A minute later Kevin Day played the ball to Oliver Crimp, who played it back to Tom Williams who played the ball across the box, where it only needed a touch to divert it into the goal; however Owen Cordiner couldn’t stretch far enough to get the desired contact.

As the game entered stoppage time George Lawrence came out of his area, forcing him to have to head the ball in an attempt to clear it, but he could only clear it as far as the path of Tom Williams, who tried to lob the goalkeeper with his left foot, but George Lawrence recovered well as he was able to get back and gather the ball.

As the game entered the sixth minute of stoppage time Kevin Day played the ball to Owen Cordiner who then played a low cross across the face of goal, where Billy Clarke slid in to try and get to the ball; however James Davies won the race and found the back of the net from close range to seal victory for his side.