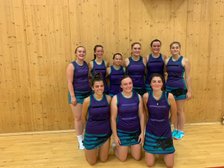 Cojags hold on for a draw

First game back after Christmas was always going to be a tough one. In the previous match Cojags had taken the win but Hornets had fought back to within 2 by the final whistle. This time round it was a similar story!

Cojags got off to a storming start, racing over the line, working the ball down the court beautifully and creating turnovers galore!

Georgie and Freya in the shooting circle where exceptional, both with their movement and shooting stats!

Anna was pulled left, right and centre pulling in some wild passes and giving some great feeds! Jen was was a workhorse through the middle, hitting the circle and working triangle with Anna to feed G&F. Mon and her go go gadget arms created loads of tips and forced them to feed away from the edge of the circle. Maiya came on to WD at Q3 and continued to hassle and turn over C passes.

A new combo in defence saw the return of 4 bibs aka Kerri HT. Bryony was stuck on the sidelines with a shoulder injury (get better soon!).
Defence were constantly disruptive with numerous tips and turnovers. Kerri and Mon worked tirelessly to bring the ball down court. Rosie had a blinder at the back, coming up with so much ball! In Q4 Grace came on and got stuck in straight away hunting the corner ball , forcing a throw in.

Despite the end score, it was a great game playing some of the best netball we've played this season so far. Next week we take on Billericay, last time we played we won by 2...