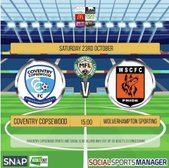 Copsewood welcome Wolverhampton Sporting this Saturday for a 3pm kick off at Allard Way, hoping to continue from last week's 2-0 win at home to AFC Bridgnorth, after 3 successive defeats before that. This will be the first time that we have played Wolverhampton Sporting this season and with both teams being fairly close to each other in the league a win would be massive for both clubs. Manager Darrren Dickson will pick his squad today with hopefully a couple of new signings in there, with them not being able to play last week due to so IT technical difficulties.
Here is a bit of history about our opponents this Saturday:- The club entered the West Midlands (Regional) League in 2005–06 competing in the youth league. The next season they entered their first team into Division Two and in the 2006–07 season the club won the Division Two title and also claimed the Youth League title. In 2007–08 season they entered a reserve team into Division Two and the Heath Town Rangers first team gained promotion from Division One into the Premier Division by finishing in third place. They also won the Staffordshire Challenge Cup in the same season. In their first season in the Premier Division they finished eighth and reached the final of the League Cup which was postponed and never played. Part way through the 2010–11 season the club changed its name from Heath Town Rangers to Wolverhampton Sporting Community Football Club. Sporting won the 2017–18 West Midlands (Regional) League Premier Division double, finishing the league with a total of 104 points and beating Black Country Rangers 3-0 in the Premier Cup Final. They gained promotion into the Midland Football League following their league victory.

For the 2018-19 season Sporting hired Steve Hinks as manager, however, he left the club bottom of the Midland Football League to take over at Nuneaton Borough, for Hinks's replacement, the club hired former Black Country Rangers boss, Wayne Spicer, in December 2018. Spicer's first game in charge was a 1-1 draw away against Worcester City. At the end of the 2020–21 season the club were transferred to Division One of the Midland League when the Premier Division of the West Midlands (Regional) League lost its status as a step six division.