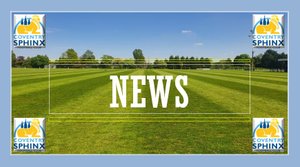 We are delighted to confirm that all of the first team management team will be continuing in their roles ahead of the new season. We are not far away from the return of training and we are pleased to announce the all important continuity in the coaching and management structure.
Shaun Thomas and John Woodward jointly took the management reigns during last season and they made a good start in the hot seat with an unbeaten run coming to an abrupt end due to the pandemic. They added some excellent recruits to complement an established squad that was also supplemented by some highly promising young talent coming through the Sphinx ranks.
Shaun and John will be assisted by Jim McClean again who came in during last season. Also continuing in his role as goalkeeping coach will be Damian Morgan. “Damo” has great experience in coaching goalkeepers including his role at Derby County Ladies. Assisting Damian in the goalkeeping department will be Lee McClay.
Also working away in the background will be Martin Sutton who will be continuing with his Kit duties. Continuing in the crucial role of secretary will be Sharon Taylor who will be performing her role of Club Secretary alongside a match day secretary role.
We are also pleased to confirm that Dave Bull will be continuing as Youth team manager. Last season the newly promoted Under 18s continued to impress in their first season in the Midland Floodlit Youth League Premier Division with their title charge brought to an abrupt end by the pandemic. “Bully” will work closely with the first team which will make sure that Youth team players will get the smoothest transition possible into the first team squad. Dave will continue to be assisted by coaches Dan Burke and Nigel Starkey.
Behind the scenes Martin Warren will continue to provide us with video coverage of Sphinx games and Chris Nee will continue producing one of the best Non-League Programmes in the area.
Retaining such a high quality team is a perfect start to the clubs preparations for the coming season and with pre-season training just around the corner, we look forward to bringing you news on player retention and recruitment in the coming weeks.

All of the above members of the coaching and match day team are available for sponsorship and your support is as crucial as ever in these difficult times.
For just £50 your name or business will be associated with your chosen person. Coverage includes Social Media, our Match Day Programme and on our Media screens within the Sphinx Sports & Social Club.
The Coventry Music Museum have already committed to continuing their highly valued support by sponsoring our Secretary Sharon Taylor.
Contact Sharon to secure your chosen sponsorship - Email: sharon@coventrysphinx.co.uk