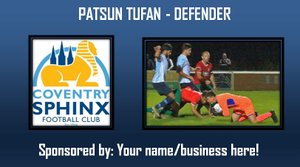 Confirmation of the arrival of Patsun Tufan

We are pleased to confirm that Patsun Tufan signed for Coventry Sphinx recently. Patsun made a number of appearances for the Coventry Sphinx Youth team last season and made an important contribution to their promotion.
During the summer, Patsun trained with Stratford Town but made the decision to return to Coventry Sphinx during pre-season. He is a player with tremendous flexibility and can play across the defence or in midfield. He made his first team debut in the FA Cup tie against Coventry Utd and was utilised in a midfield position. In the replay he performed superbly at left back which quickly demonstrated his ability to play in different positions.
Patsun Tufan is available to sponsor for just £50 and you can easily secure his sponsorship by emailing Sharon Taylor at sharon@coventrysphinx.co.uk
Share via
FacebookTwitter
https://www.pitchero.com/clubs
Recent news