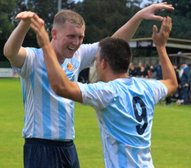 First group of retained players agreed
Joint managers Shaun Thomas and John Woodward have been busy retaining the majority of last season’s first team squad and we can now announce the first group of players who will remain with the club ahead of the 2020/21 season.
Coventry Sphinx were on an unbeaten run when the season was brought to a premature end and we are pleased to confirm that many of those players will remain at the club.
Among the first group of players to sign are:
Tom Cross - Goalkeeper - A senior figure in the dressing room and he will continue between the sticks for us this season.
Patsun Tufan - Defender - Impressive 1st season after stepping up from the youth team to become a regular.
Charlie McConnachie - Full Back - Last season Charlie joined us after his release from Aston Villa and made some important contributions in his debut season with the club.
Louis Guest - Defender - He continues in the heart of the Sphinx defence after another consistent season in the Sky Blue and White.
Jamie Draper - Defender - Last season he stepped up to the first team squad from our Youth team and made a number of appearances which he is expected to add to this season.
Lawrence Rawlings - Attacking midfielder - Made a clean sweep of the end of season awards after joining from Coventry Copsewood last summer.
Liam Cairns - Midfielder - A rock in the Sphinx midfield for the last few years and he will make his presence felt once again.
Callum Woodward - Midfielder - Last season’s Captain and top scorer will again be a key player for Coventry Sphinx.
Lewis Noon - Midfielder - Quickly established himself in the Sphinx midfield after joining from Bedworth United last summer.
Harvey Billing - Midfielder - Broke through from the Sphinx Youth team last season and produced some outstanding displays.
Alex Pearson - Attacking midfielder - Another product of the Youth team who already has a number of first team goals to his name.
Scott Hammond - Attacking midfielder - Produced some match winning performances and scored some key goals in his debut season with the club.
Ashanti Pryce - Striker - Joined the club late last season and immediately got on the goal trail. More of the same is hoped for this season.
Mo Billy - A striker who stepped up from the youth team with ease last season.
More players will be announced in the coming days including more retained players and new signings. Harvey Billing, Tom Cross, Louis Guest and Lawrence Rawlings are already reserved for sponsorship but all of the other players are now available for sponsorship for just £50. Your sponsorship will be announced on social media, acknowledged in our high quality match day programme and appear on our Social Club media screens.
Email: sharon@coventrysphinx.co.uk to reserve your choice
Share via
FacebookTwitter
https://www.pitchero.com/clubs
Recent news